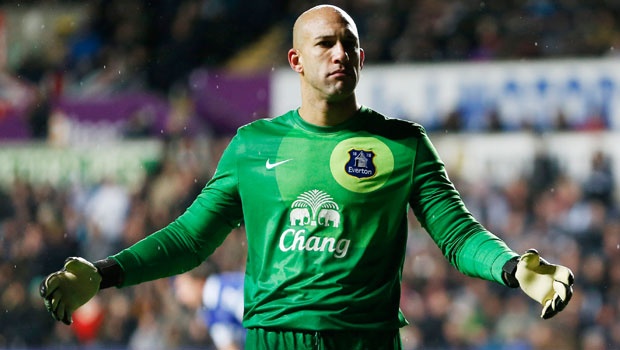 Everton goal keeper Tim Howard admits that his team will be looking for revenge after having been knocked out of the FA Cup by Arsenal and are now focused on pipping them for that last Champions league spot.

Everton take on fourth placed Arsenal at Goodison Park on Sunday knowing that the outcome could decide if the Toffee’s qualify for the Champions League or not for the first time since 2005.

Currently Everton are four points behind Arsenal with a game in hand knowing that if they win their seven remaining matches they will finish above the Gunners.

Last month Everton’s dream of silverware was quashed after being knocked out of the FA Cup by Arsenal losing 4-1 and according to Howard they are looking for revenge telling the Daily Star.

“We are looking forward to playing Arsenal,” the American said.

“We still have a sour taste in our mouth about what happened at Emirates Stadium in the FA Cup, so we will try and put that right at home.

“Two weeks ago we were looking to catch Tottenham, now we are asking ourselves ‘can we catch Arsenal?’.

“We’re not favourites to finish fourth because gap is still four points.

“It’s in our hands because we have a game in hand and we have to play them, but there is still have that four-point lead so it is difficult.

“We are on the outside looking in, but we are in the fight. If we could win next week and keep on their heels, that would be important for us.”