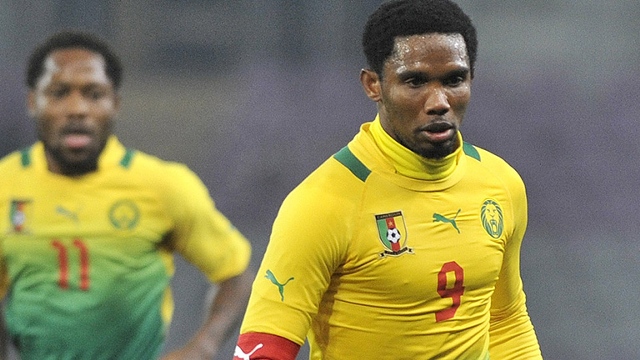 Chelsea striker Samuel Eto’o while on international duty for Cameroon has claimed that his fellow teammates conspired against him coming up with a plot not to pass him the ball during their World Cup qualifier against Tunisia that ended 0-0 in Tunisia back in October.

Today the two teams meet again in a winner take all match at the Stade Omnisport Ahmadou Ahidjo (Yaoundé) in Cameroon that will decide which team will be going to next summer’s World Cup in Brazil.

Eto’o was not impressed with his fellow countryman complaining that they deliberately would not pass the ball to him during the first-leg match.

‘It’s true and regrettable,’ Eto’o said. ‘And when you watched me retreating to the midfield to chase the ball, it’s because I heard of the plot.

‘Football is a collective sport. You are obliged to pass the ball even to your worst enemy, especially when he is in a good position to receive it.

‘It is time to put all these issues behind us and concentrate on Sunday’s match.

‘We need to unite, chat during the game and do our best to obtain the result that the entire nation is expecting from us and, since our coach is right here, I want him to help stop the act of not passing the ball to a player on the field.’

Former SC Freiburg coach, and now the man in charge of Cameroon Volker Finke refused to answer questions on Eto’o’s accusations, but did say it sounded like ‘kindergarten talk’.

‘I didn’t see anything of such a nature during that match,’ he said.

‘Each of you can go and watch the video once more. I have watched it over again for about six to seven times. I never noticed any time when a player refused to pass the ball to Eto’o or any other player.

‘There could be some issues between the players but nobody refused to kick the ball to Eto’o during that encounter. To me it sounds much like a kindergarten talk.’
Cameroon just qualified for the World Cup with a comfortable 4-1 win over Tunisia.