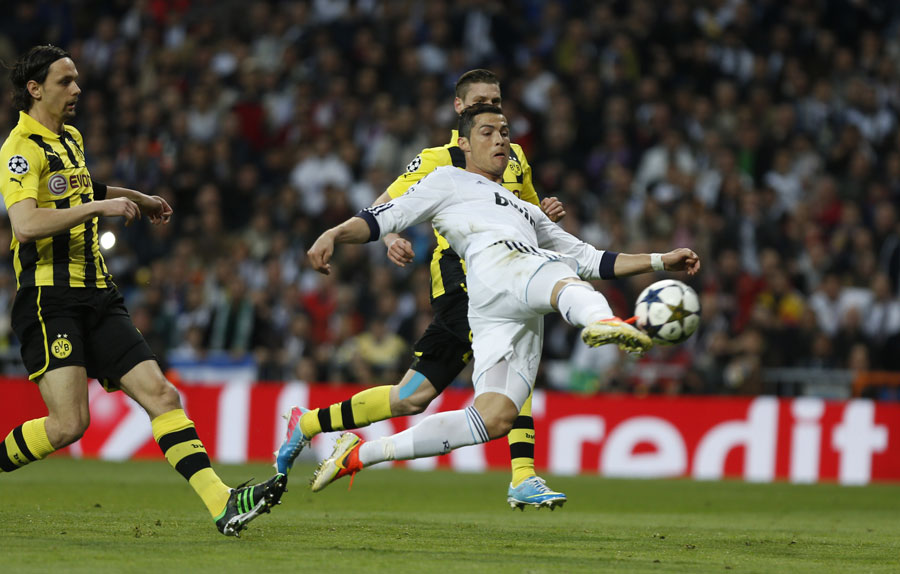 Borussia Dortmund sealed their place in the Champions League final after seeing off the late threat of Real Madrid by winning 4-3 on aggregate.

The German side arrived to the Bernabeu with a healthy 4-1 advantage from the first leg thanks to their demolition of Madrid a week ago, but despite losing the second leg 2-0 to the record nine-time European champions, they were able to hang on and complete the job.

The game was set to end on a flat note from a Madrid perspective, but goals in the 83rd and 88th minutes from Karim Benzema and Sergio Ramos ensured a nervy finish for Dortmund. However, Madrid could not grab the goal which would have seen them progress as Dortmund closed out the overall victory.

Madrid were inspired early on and attacked Dortmund right from kick-off, but Angel Di Maria failed to take a couple of their opportunities in the first few minutes. However, the best chance fell to Gonzalo Higuian.

The Argentine was played in by Mesut Ozil but was thwarted by Roman Weidenfeller – who stood tall to deny Madrid from capitalising on their bright opening.

Mario Gotze, the player who is set to move to Bayern Munich in the summer, was substituted after 14 minutes with what appeared to be a hamstring injury, and Dortmund were fortunate not to be behind when Ozil fired wide with the net gaping from a one-on-one position.

The German outfit overcame the sluggish start and grew in confidence, and were able to conjure up an opportunity moments later, with Robert Lewandowski’s volley safely landing in the hands of Diego Lopez.

Weidenfeller kept the score line goalless when he spread himself to keep Cristiano Ronaldo out, and the Madrid players could sense the crowd beginning to grow restless, which was reflected in a few tough challenges from Ramos and Fabio Coentrao.

Lewandowski almost struck the first goal of the evening as the four-goal hero from the first leg crashed his shot against the bar to let Madrid off the hook.

Lopez kept Madrid’s feint hopes alive when he produced a fine save from Ilkay Gundogan from close-range.

Jose Mourinho threw on Benzema and Kaka desperate to net a goal, but the latter flashed a header wide, and Madrid were now beginning to open up in defence as they pushed men forward.

The best moment of the night came from Madrid for their first goal, and it was Sami Khedira who threaded a ball to Ozil, who in turn picked out Benzema to finish and give his side the lead and some hope eight minutes from time.

Skipper for the night Ramos then found the back of the net five minutes later and put the pressure on Dortmund at the end, and despite a huge chunk of stoppage time – where Madrid could have been awarded a penalty when Ronaldo was thrown to the floor – Dortmund celebrated come the final whistle.