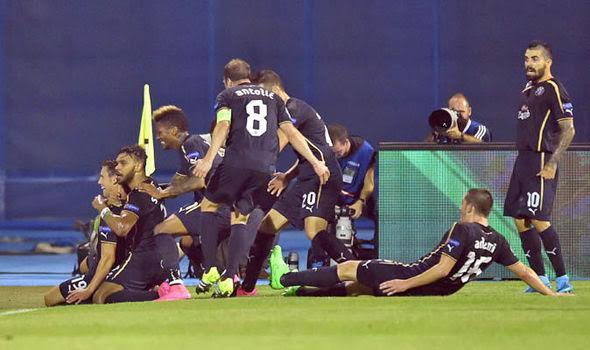 Dinamo Zagreb manager Zoran Mamic says his game plan was executed perfectly in their 2-1 win over Arsenal in Croatia last night and that he had cracked the code in finding the right tactics to beat the Gunners.

“Arsenal is one of the best teams who ever played here and they did exactly what we agreed they would do,” said Mamic.

“We thought it would be very important to close the middle, to stop the fast passes.

“That’s what we did and it’s nothing new.”

Alex Oxlade-Chamberlain’s own goal and Junior Fernandes’ header gave the home side a commanding 2-0 lead before a late strike from Theo Walcott gave the Gunners a conciliation after the dismissal of Oliver Giroud for a second yellow card.

Despite the loss, Arsenal had 61% of the ball, but were frustrated by the tactics Mamic had deployed to close down their midfield which led to a sense of frustration the later the game went.

“We have already seen other teams who beat Arsenal use the same tactics. This is a good way to beat them,” he said.

“Arsenal has top four top international players, and other top players compared to Dinamo, but they are not world class.

“We just concentrated in not letting them come to the ball. It was probably one our best games tactically.”