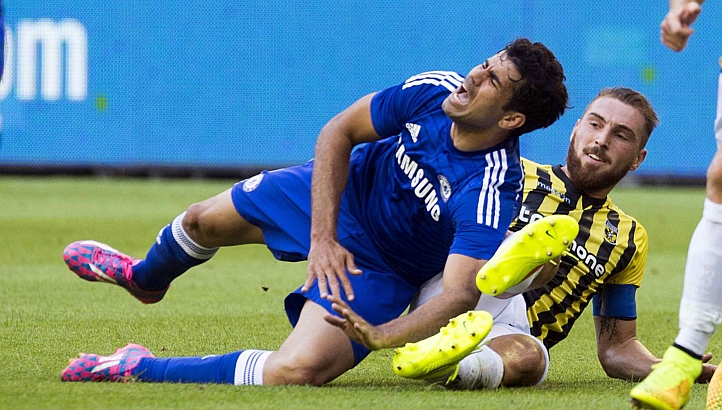 Chelsea are sweating real hard on EPL leading goal scorer Diego Costa after it emerged that the player will eventually need a surgery on his recurring hamstring injury. The surgery if done could rule the prolific striker out for up to six weeks.

The 26-year-old has been suffering with the same niggles in his hamstring since his days at Atletico Madrid and has carried the injury through the FIFA 2014 world cup for Spain.

Chelsea has however, managed the player’s situation with utmost caution since his £32m move to West London. He has played in all of Chelsea’s league games prior to the October international break where he returned from duty with Spain aggravating the injury.

He has since not represented Chelsea and could be further side lined if he goes for the surgery. The good news for Chelsea however, is that the player does not need to go for an immediate surgery as the club won’t be risking the health of the player by continuing to manage him through the season.

The club would need to find the right time for the player to go for the surgery and get the hamstring problem sorted once and for all. The end of season break would have been an ideal time for the club as the player will only need to miss few of Spain’s Euro 2016 qualifies and some of the club’s pre-season games.

Jose Mourinho will, however, wish the player could use the upcoming international break to go for the surgery. This will mean the player will miss Spain’s upcoming Euro 2016 qualifiers and some games for the club.

Chelsea is top of the Premier league already and didn’t do too badly in the few games they have played without Costa. Even with injury to back-up Loic Remy, Didier Drogba has done a decent job leading the line. It will therefore make more sense if Diego Costa be allowed to undergo the surgery immediately.

Aside the Liverpool’s game, Chelsea’ next few games are not ones that could be termed difficult. Diego Costa would be back fitter and in a better shape for the club before the busy Christmas period. And that is when Chelsea will need him most especially going into the second stanza of the season through the run in to the end of the season where you have important but tricky games coming thick and fast.

There is no point risking the player when the problem could be solved and both parties will be good for it. Loic Remy will soon return to action thereby taking off much responsibility from Didier Drogba. The French man has shown in the few matches he has played for the club that he is well able to get goals for the club in the absence of Costa.

Costa has been phenomenal for the club, scoring goal after goals for the club despite not playing at full fitness. And he will be a real beast when he gets his latest injury woes behind him.

The club medics would assess the situation and make the best decision as concerning the injury that will be good for both player and the club going forward.