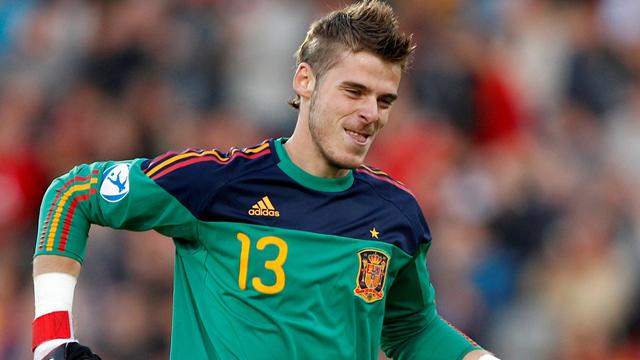 As he closes in on his 100th appearance for the club Spanish goalkeeper David De Gea says that it is a particularly good moment for him in his career.

The 23-year-old joined United from Atletico Madrid back in 2011, and at first he had a difficult time adjusting to the physicality of the English game with many fans wondering if he would ever become the Red Devils starting keeper.

If he remains fit the match against Tottenham on December 1st will mark his 100th game in a Manchester United Jersey.

When speaking about it with the Daily Mirror De Gea said: “One hundred, eh? Wow!

“I’ll be delighted to reach that figure. It makes me very happy and I want to make it to 200 and then 300 appearances.

Alex Stepney holds the record as a Manchester United keeper with 433 appearances, something that De Gea would love to emulate.

“The record is a lot of games. You never know though. At the moment, that figure seems very high but I’ll take it one game at a time.

“I hope to play as many games as I can for Manchester United and, who knows, maybe one day I will reach that number and go even higher.

“I’m very happy with my form. I feel like this is a particularly good moment in my career right now and I hope to continue.”

He added: “I do a lot of work in the gym these days and I enjoy that. I have also changed the food I eat and that’s helped me put on muscle and bulk up.

“It’s been a big change, but its working.”