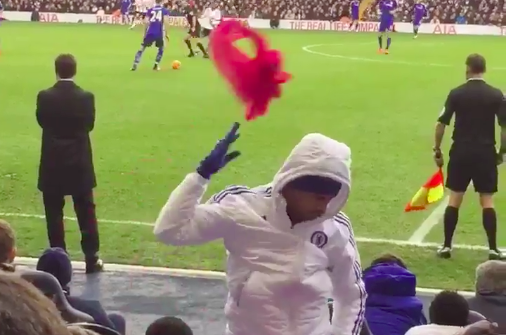 Chelsea manager Jose Mourinho benched striker Diego Costa for Sunday afternoons match with Tottenham after having seen the £32 million striker only manage to score four goals so far this season.

Seemingly pissed off with the managers decision to drop him from the team, the Brazilian born Spaniard did not bother to take part in the pre-match warm, and was first to board the Chelsea bus following a very lacklustre 0-0 draw.

Just like a baby who may throw their toys out of the pram when not getting their own way, footage of Costa throwing his substitutes bib in Mourinho’s direction after realizing he was not going to take part in the match went viral around social media, with Mourinho saying: “If he wants to hurt me, it’s not with a bib!” he quipped.

Adding “Diego is very privileged because he was the last one to be on the bench. Everyone else has been.

“The captain John Terry. Ivanovic, Cahill, the vice-captain of England, Fabregas, Pedro, Hazard – the player of the season.

“Oscar, everyone was on the bench. Diego was privileged because I kept him in the team for all these matches. Today we thought the best strategy was this one. We are happy with the decision and the players.”

Mourinho was already thought to be looking at striker options for the January transfer window, with this latest incident even more reason to bring another forward into the team.

You can watch the incident in the video below.