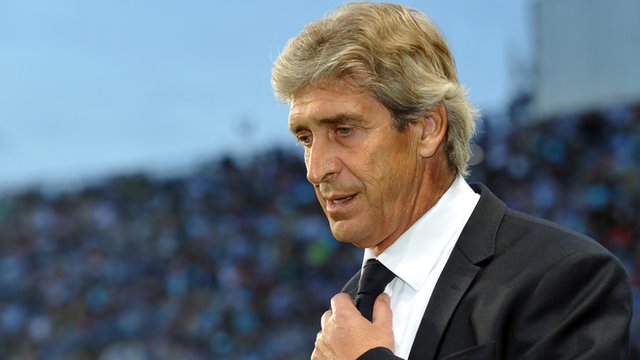 Manchester City manager Manuel Pellegrini has had a go at both Liverpool manager Brendan Rodgers and Chelsea boss Jose Mourinho ahead of the big showdown between Manchester City and Liverpool on Sunday.

Usually Pellegrini keeps his opinions to himself in the build-up to big matches, but it appears this time that he could not help himself as he accused both Rodgers and Mourinho of being liars when talking about title pressure.

And as a double whammy he said that should Chelsea win the Premiership it would be bad for English football as the Blues do not score enough goals.

Chelsea has only managed 65 goals in 33 games leading to Pellegrini saying: “Big teams must play as big teams.”

Since the Premier League came into existence the team that has scored the most goals has won the title except for two occasions when it went to a Jose Mourinho managed Chelsea.

Pellegrini told the Sunday Star: “It would be very disappointing – for football, for the fans, for everyone.

“I think that the most attractive football, the more goals you can score, should be rewarded.

And while Mourinho calls his team the “little horses” and Rodgers declares Anfield a pressure free zone the Chilean Pellegrini is having none of it saying: “I don’t think it’s true. Maybe they are covering themselves for if they don’t win the title. I don’t know what their players think – but I’m sure if I said to my players we don’t have any pressure to win, I don’t think that would work.

After having been out for a month City striker Sergio Agüero is set to start for City against Liverpool, and the City boss confirmed that he would never swap him for Luis Suarez saying: “I think a lot of Suarez – he is a great player, not only a striker. He scores goals but he also plays a lot for the team.

“Sergio has had a difficult season with injuries but I am absolutely sure that any team who played with Sergio would be improved.”

Speaking ahead of Sunday’s trip to Anfield and a midweek match against Sunderland Pellegrini said: “If we win both we have made a huge statement – but it won’t be finished.”