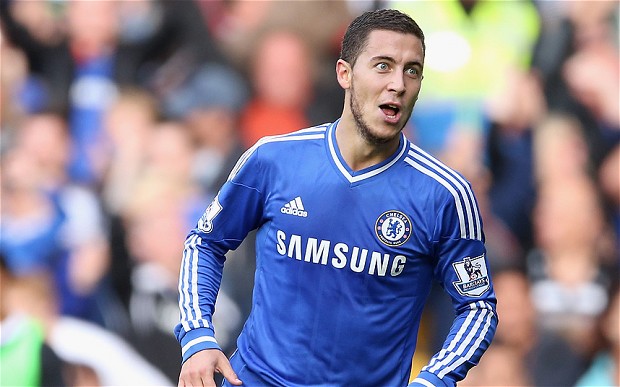 Following on from the signing of Chelsea defender David Luiz in a deal that could be worth up to £50 million the oil rich French Champions are set to turn their sights on Chelsea winger Eden Hazard.

Backed by the oil rich state of Qatar French champions Paris Saint-Germain now wants to conquer Europe and the signing of Brazilian defender Luiz now has manager Laurent Blanc turning his sights onto one of Chelsea’s other stars Belgium international Eden Hazard.

When asked what he liked about Hazard the French manager told the Daily Mail: ‘Why do I love Eden Hazard? Because he is a player who eliminates.

‘We can discuss all of the systems, or a player’s individual or collective qualities.

‘But a player who can eliminate three, four players at any time in a game is something else.

‘We do not know what to expect with these players. They destabilise the opponent.

‘We know we want plan A. But of course there is a plan B if he doesn’t come. There is also a plan C.’

The sale of David Luiz is all part of a plan by manager Jose Mourinho to build a team that will dominate English football, and whether or not he will give into the temptation to sell Hazard or not we will have to see, but our take following his comments on Hazard after losing to Atletico Madrid in the semi-final of the Champions League is that if they (PSG) are willing to pay what they did for Luiz then Hazard will be sold also.