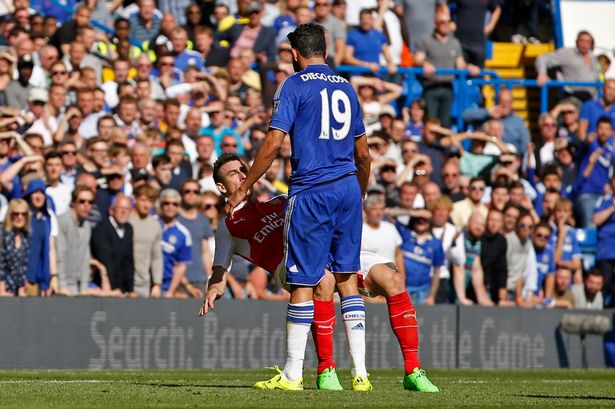 Chelsea striker Diego Costa has been hit with a violent conduct charge following his clash with Arsenal defender Laurent Koscielny during the Blues 2-0 win over the Gunners at Stamford Bridge last Saturday.

Costa managed to get away with a slap to the Frenchman’s head that referee Mike Dean missed, but after having reviewed video of the offence the FA has decided to charge the Spanish international, publishing a statement that read: “Diego Costa has been charged for an alleged act of violent conduct which was not seen by the match officials but caught on video.

“The Chelsea forward was involved in an incident with Arsenal’s Laurent Koscielny in the 43rd minute of the game. He has until 6pm tomorrow [Tuesday 22 September 2015] to reply.

“Off the ball incidents which are not seen at the time by the match officials are referred to a panel of three former elite referees.

“Each referee panel member will review the video footage independently of one another to determine whether they consider it a sending-off offence. For retrospective action to be taken, and an FA charge to follow, the decision by the panel must be unanimous.

“Finally, both clubs have been charged for failing to control their players under FA Rule E20.