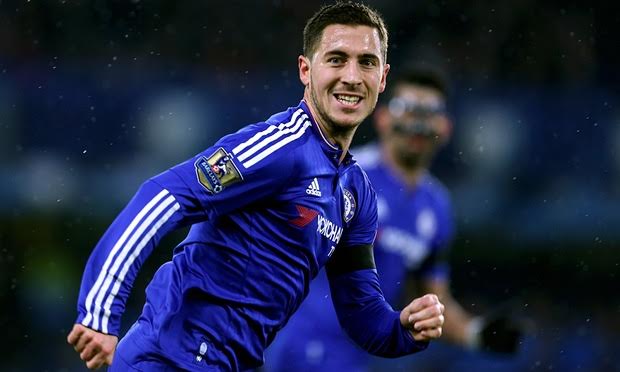 Chelsea star Eden Hazard is not having the type of season we would expect from last year’s PFA Player of the Year, yet despite his inability to tie down a starting role in interim manager Guus Hiddink’s team, he is still one of the most sought after players on the planet.

Chelsea beat out a host of top European sides for the Belgium international, paying French Ligue 1 outfit Lille £32 million for the now 25-year-old back in 2012.

Just a season ago with Jose Mourinho in charge and the Blues running away with the Premier League title, just the very idea of Hazard leaving Stamford Bridge would have been a non-starter.

Fast forward a year and what we see is a Chelsea team poised to make big changes in the summer as Russian billionaire owner Roman Abramovich prepares to appoint yet another manager to his West London toy.

As Chelsea prepares for their Champions League first-leg match against Paris Saint-Germain on Tuesday night at the Parc des Princes, Hazard admitted to French media outlet Le Parisien that it would be difficult to say no to Laurent Blanc’s team if they tried to sign him in the summer.

‘It’s hard to say no to PSG – as with all the teams capable of winning the Champions League,’ said Hazard.

‘Now PSG are part of this category. And, for me, winning the Champions League is the main objective.

As for playing Champions League football next season, the Belgium’s best bet would be to leave Stamford Bridge following the Blues worst ever start to a Premier League season, that now sees their best chance of playing in Europe next campaign resting with them winning this seasons Champions League.

Another team offering a Champions League option to Hazard will be Spanish giants Real Madrid, after their new manager Zinedine Zidane told Sky Sports back in November that after Messi and Ronaldo he considers the young Belgium to be the best footballer in the world.

“I have no doubts he’ll be back,” said Zidane. “After Messi and Ronaldo, Hazard is my favourite player. It is spectacular to see him play.”

And he added: “Do I see him going to Real Madrid? I love the player, that’s all I will say.”

Here at Soccer Transfers we feel that it is almost a certainty that Hazard will leave Chelsea next summer, with the only question now being, where will he end up?