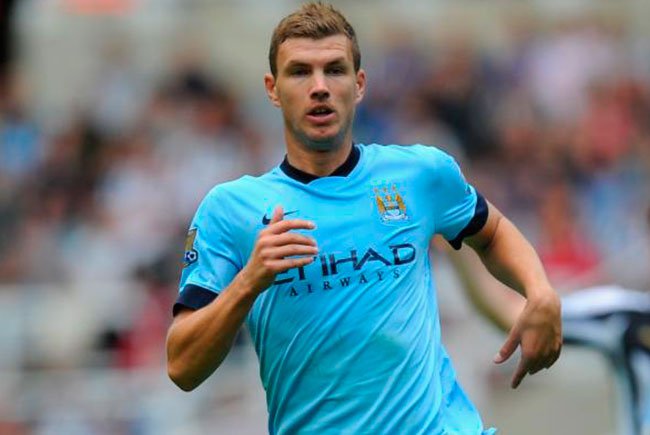 Despite the talk of the most work he will be doing this summer is walking from his towel to the Chelsea manager Jose Mourinho will be active in the transfer market as he look to build on this seasons success.

One player Mourinho has in mind to bring to Stamford Bridge is Manchester City striker Edin Dzeko as a replacement for Didier Drogba.

Mourinho will lose the 37-year-old Ivorian striker next month when his contract expires, and with Dzeko apparently heading for the exit, the Portuguese manager thinks he can pick up the Bosnia & Herzegovina international for only £10 million.

The Bosnia & Herzegovina striker is heading out of the Etihad after a disappointing season, and Jose Mourinho now hopes to sign him for £10million.

City is ready to listen to offers for the 29-year-old, and think they can get as much as £15 million following interest from European clubs Juventus, Inter Milan, Borussia Dortmund and Wolfsburg but all of them balked at City’s price tag, making Mourinho believe he will be able to get him for around £10 million.

Dzeko has had a poor season only scoring six goals after falling down manager Manuel Pellegrini’s pecking order with the Chilean now preferring to star Wilfried Bony to play alongside Aguero in the Citizens attack.

Dzeko does however seem to possess the knack of scoring important goals which has caught the Blues bosses eye, and will make a move for Dzeko to help cover for Diego Costa, who seems to suffer with hamstring issues meaning he is always likely to miss matches or need to be rested throughout the season.