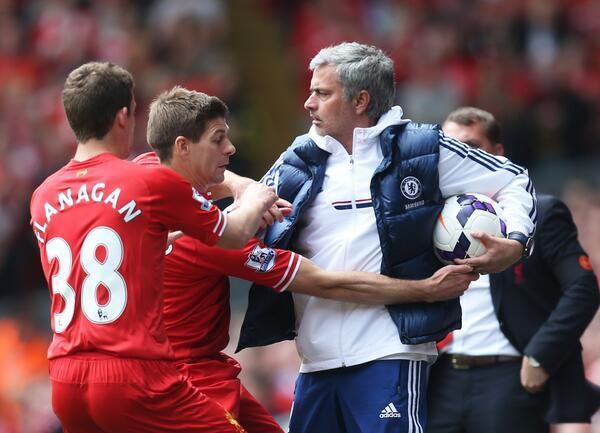 Watching Chelsea manager Jose Mourinho’s press conference after his side had just beaten Liverpool 0-2 at Anfield of Sunday was witnessing a manager trying to justify how cheating is an acceptable form of playing football.
The self-appointed “special one” applauded the way his team performed a master class in how you manage to park the bus in front of goal in order to force your opponents to shoot from long range through a mass of bodies in the hope that somehow the ball would find a way through.
When one journalist asked Mourinho if he had any regrets about the way in which his team deliberately delayed the game Mourinho just looked down while muttering a suggestion that sounded as if he was saying it was just a sad question to be asking.
What for me was that was sad, was a game that had all the hype and build-up of this one came down to a manager of a club with tremendous resources available had instructed his team to continuously hold up play at every chance they got.
Chelsea’s time wasting antics started almost from the very beginning when goalkeeper Mark Schwarzer kept the ball of the field for 35 seconds which should have resulted in a warning or even a booking for misconduct or cheating punishable under law 12.28.4.
During the first 10 minutes of play Chelsea kept the ball out of play for four minutes, yet all referee Martin Atkinson did was point to his watch suggesting that he would be adding on time.
It is pretty sad when you think about it that a manager that has spent over $150 million since his return to the club decides that he has to cheat in order to win.
Liverpool can also share some of the blame for falling into Chelsea’s trap by getting frustrated and reacting to Chelsea’s tactics yet, in the end Chelsea won and will probably book themselves a place in the Champions League final by playing the same way against Atletico Madrid on Tuesday night.
It is no wonder that many Americans don’t like soccer when you have coaches like Mourinho in charge who spoil what should be fantastic games by employing such devious tactics.
If I was Roman Abramovich, I would have to start asking questions as to why Mourinho was spending millions of dollars on players just so they could get results playing the least entertaining soccer possible.
And while Chelsea might in the end be responsible for Liverpool not winning the title they robbed the fans of being able to watch the beautiful game played the right way.