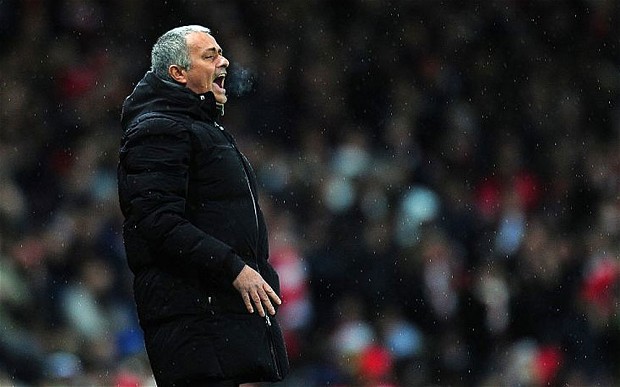 Chelsea manager Jose Mourinho defended his team’s tactics in the 0-0 draw at the Emirates last night having a go at Arsenal for their reaction to some of the tough tackling.

According to Arsenal midfielder Mikel Arteta, John Obi Mikel should have been sent off in the first half with manager Arsene Wenger saying that he thought he was very lucky to avoid punishment.

Arsenal could also have had a penalty following Willians tackle on Theo Walcott , but Chelsea boss Mourinho believes both incidents were over reactions by the Gunners.

He said: “They like to cry – that’s tradition. I prefer to say that English people – and I give one example, Frank Lampard – would never provoke a situation like that.

“Players from other countries, especially some countries, they have that in their blood.

When asked specifically about Mikel’s tackle, Mourinho insisted it was fair.

He added: “It was a hard one, an aggressive one. Football is for men or for women with fantastic attitude.

“There are other sports without contact and fantastic sports and sports that demand a lot from the players, but no contact.

“Football is a game of contact. English football, winter, water on the pitch, the sliding tackles become at a fantastic speed. So be proud, play with pride.”

The Arsenal fans started singing that Chelsea were boring at the end of the match following the goalless draw that see’s Mourinho’s unbeaten record against Arsenal now at ten games.

Responding to the Arsenal fans ‘boring’ chants, Mourinho said: “I’d agree. I played against them 10 times and I never lost.

Mourinho added: “Happy with the result? I would say not unhappy. We came to win, we wanted to win, we didn’t want to lose. It’s very important not to lose, because if we lose we are five points behind the leader.

“And, with a point, we are two points behind both leaders. That’s a completely different picture. We tried to win, but we are not unhappy with the point.”