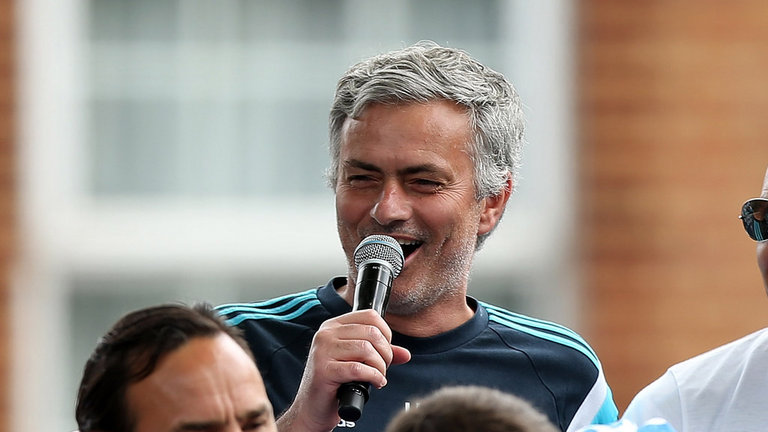 Chelsea boss Jose Mourinho used the clubs end of season dinner to poke fun at critics who complained about the Blues style of play while also taking the piss out of the Premier league winner’s rivals.

Mourinho said: “I don’t think my players got the respect that they deserve after what they did from day one till the last day.

“And these are words that I really feel, serious words.”

Using a graphics board while he spoke Mourinho said: “This is a football pitch with two goals, one ball, but there is one team that would like to play without goals,” he said, of the plain red-shirted team, or Manchester United.

“And they ask the international board of FIFA to play like this, but they were told that it was not possible, that the bigger percentage of ball possession doesn’t win matches and they were not champions.”

The Portuguese manager then shifted his attention to Manchester City saying: “After that there was another team (wearing sky blue shirts) that were less radical and they asked to play only with one goal.

“Again, the international board told them ‘I’m sorry, you can’t be champions because football is with two goals’.”

Then moving on to Arsenal Mourinho said: “The third team (red shirts, white sleeves) was almost there, because they wanted to play with two goals.

“They were scoring some, they were also conceding some. They were fantastic. They scored really beautiful goals, they concede some goals too and they were almost there.

“But they asked the international board to play only between January and April. And they told ‘no chance, no chance’.

“You have to play between August and May, so they couldn’t be champions.”

Then lastly the “special one” turned his attention to his own team saying: “Finally come another team (blue shirts). They wanted to play with the normal rules and they know that to win matches they had to score one more goal than the opponent.

“How can you do this? By scoring a lot of goals or not conceding and scoring one.

“And they did it both ways. Scoring a lot, conceding some. Scoring one goal and conceding no goals.

“That was the option and lots of goals were conceding, they played from August till May and sometimes they brought the bus.”