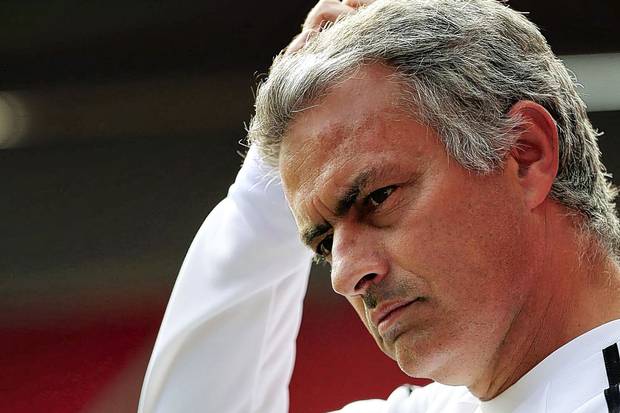 Chelsea manager Jose Mourinho has refused to write off Manchester United’s chance of winning the Premiership.

So far this season Manchester United has found it tough going under new manager David Moyes, slipping 12 points behind league leaders Arsenal after a 0-1 loss to Everton midweek.

Mourinho however insists that United has a winning mentality, and it is too soon to count them out of what is expected to be the closest title race in years.

“If it was another club I’d tell you it’s impossible, but with Manchester United I don’t say that,” said Mourinho.

“The reasons are because of the potential of the team, what the club represents and the culture of the club.

“They are calm, they go the same way and support the manager. Nobody touches the manager.

“They have a project. If they don’t win this season they believe they will win next season.

“It’s a very, very stable situation and an example to many others. Because of that they are still a contender.

“They will stick together, they will fight and try to get 12 to 15 points in a row. Yes they are still a contender.

“They will wait for matches between Chelsea, Arsenal, Manchester City, Liverpool and Tottenham when others will lose points.”

“Arsenal lead and if they lead it’s because they have more points than other people and because they are better and have made less mistakes,” he said.

“If they are there it’s because they deserve to be there. But the championship finishes in May. Let’s see what happens then.”

Chelsea play Stoke City away on Saturday to conclude three Premiership matches in seven days while Arsenal has had the same number of games, but spread out over nine days.

“This is like preparation for the Christmas period,” he said. “This week is a hard week because we start on a Sunday, not even on a Saturday, playing Southampton, but finish on a Saturday.

“For some clubs it’s Saturday-Sunday when for us it’s Sunday-Saturday.

“Once more when it comes to fixtures, we are always in trouble. It’s a big coincidence.

“I don’t like to give a day off to the players after a big game, but I’ll have to give them the day off on Sunday.

“I like to give physiological recovery, but the mental point of view is more important. It’s important they have a free Sunday to disconnect.”