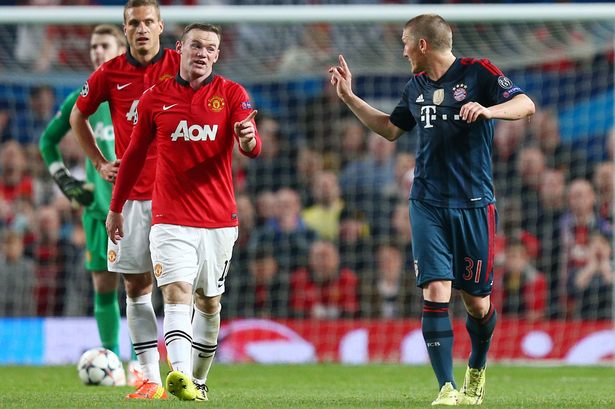 Ahead of Wednesday night’s second leg Champions league match between Bayern Munich and Manchester United the German club has banned the Daily Mirror from covering the match after a back page headline the published following the first-leg in Manchester having a go at Bastian Schweinsteiger which read: “You Dirty Schwein.”

Schweinsteiger scored a brilliant goal in the first-leg at Old Trafford, but was later sent off after mistiming a tackle on Wayne Rooney for which the German pointed a finger at Rooney and accused the Scouser of cheating as he was walking off the pitch.

If you watch the attached video you can excuse the German for being unfairly treated as the evidence shows that Rooney did take advantage of it in order to get the German sent off for his second bookable offense.

Bayern Munich were deeply offended by the headline even though the Mirror had replaced it for their second edition.

Schwein in German means pig, and is offensive to call someone by that name leading to Bayern’s media director, Markus Hörwick calling the Mirror to complain saying that the headline was: “disrespectful, discriminatory and personally insulting” towards Schweinsteiger.

In order to punish the British rag both of the papers reporters have been banned for Wednesday’s second-leg match in Bavaria.

The first-leg at Old Trafford finished 1-1 to give the Germans a slight advantage with the away goal, but fans should be in for a treat on Wednesday night as the two side go at it once more.

The sad thing however is that this type of headline is quite common place in the British gutter press, and is unlikely to change anytime soon.