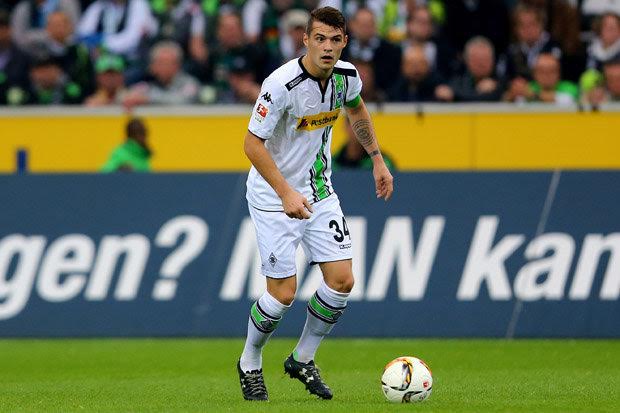 Swiss international defensive midfielder Granit Xhaka has played down talk over a possible move to the Premiership by saying he is happy to remain at Borussia Monchengladbach.

The 23-year-old was being linked with several top European clubs of late, and with both Liverpool and Arsenal in the market for a DM it is no surprise that he was being talked about as a possible January target for both of the Premiership bigwigs.

Reports from German outlet Bild last week claimed that Liverpool manager Jürgen Klopp was busy preparing a £19.6 million bid for the Bundesliga star, who is under contract with the North Rhine-Westphalia club until 2019.

Klopp is said to be a huge fan of the former Basel player while Gunners boss Arsene Wenger is now more desperate than ever to find cover in the centre of the park following the recent injury to Francis Coquelin.

When asked about the transfer rumours surrounding him Xhaka said: “I am under contract until 2019 here and I am really enjoying life at the club.

“This is all that matters to me, for the rest I have got my advisor and my father!”

Meanwhile Monchengladbach is due to play Sevilla in the Champions League tomorrow, so if you want to get a look at Xhaka play it presents you with a good opportunity, because no matter how happy a player says he is at a club the chance to move to the Premiership would be too tempting to turn down.