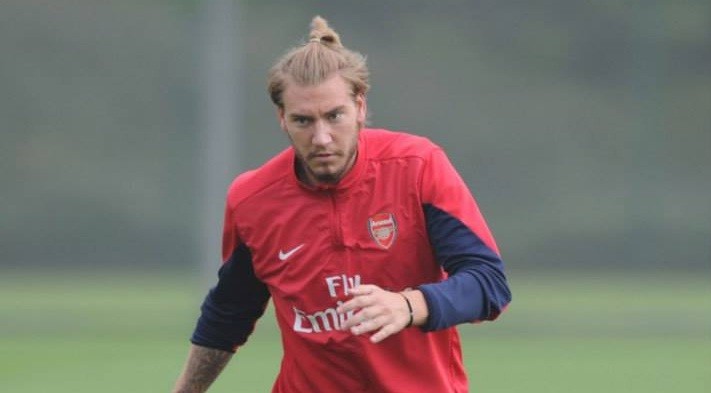 Arsenal striker Nicklas Bendtner has been voicing his opinion after being sent to train with the reserves, and then on his own before his return to the first team in September saying that he is training harder than ever in order to find a new club.

Speaking to Danish newspaper Berlingska, Bendtner said he was very disappointed on the transfer deadline day when Wenger phoned to tell him that he would be staying at Arsenal.

“Everything was in place for me, there were three clubs that were just waiting for me to say ‘yes please’ to them,” he said. “I was very disappointed when he [Wenger] phoned because I was ready to move on. I didn’t actually think that they wished to keep me.”

The Danish international spent all of last season at Juventus on loan yet only managed to play nine games due to injury.

These comments from the 25-year-old will not sit well with Wenger as Arsenal prepare for a big match against Manchester United at Old Trafford with the manager having no other striker to turn to should Oliver Giroud become injured.

“I have to fight twice as hard during every game and also score to have a chance to start next time, which in itself is hard when I haven’t hardly played in a year due to injury and have not had a pre-season together with the others on the team,” he said.

The Danish striker got booed by a group of Arsenal fans when he last played in a match against Chelsea, and says it does not bother him at all.

“That’s just what it is like to be a footballer. But I will remain strong because if I start to listen or believe in them I could quickly find myself in a black hole.”

“At the moment I am an easy target for [some of the fans] because I want to leave the club and Arsenal don’t want to keep me.

“And these haters – they always choose the same solution. But I think it is unfair to have a go at me when I had a transfer in place in the summer and Wenger told me to stay.

“I am training far more seriously [now] than I have ever done in Arsenal. I am in the process of building myself up so that I become this strong machine, this perfect product to sell. I want to start as strongly as possibly in my next club.”