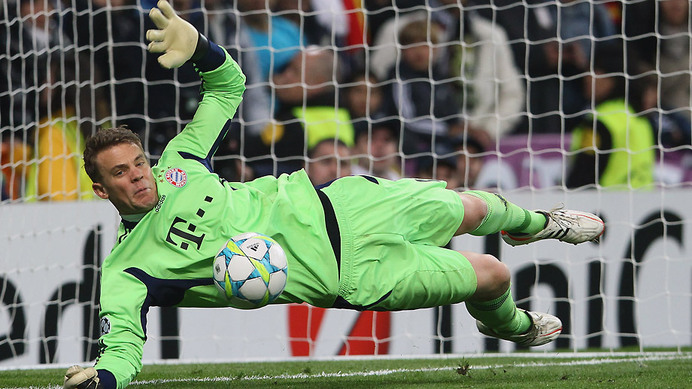 Manuel Neuer feels as if his club are not taking Manchester United too seriously following the clubs domestic problems this season, and that they could defy the odds and win just as Chelsea did when winning the final two years ago.

The Germans were the big favourites to win the title but in the end it was Chelsea that lifted the trophy following a dramatic penalty shootout.

“We just have to think back to two years ago,” the Bayern goalkeeper said.

“Chelsea who finished sixth and won the Champions League, unfortunately for us.

“In the Premier League there have been a number of less than convincing performances (from United) but if you look in the Champions League they fought back at Olympiakos to win 3-0 at home and that shows there’s a difference (between their domestic and European form).

“If you look at the history of Manchester United, they are always a big side so there is no time for underestimating them.”

The German shot stopper also knows what it is like losing to United as he did with Schalke in the Champions League semi-finals.

United beat the North Westphalia club 6-1 on aggregate with then United manager Sir Alex Ferguson saying that it could have been much worse describing Neuer’s performance as the “finest” he had ever seen while at Manchester United.

It was such a fine job of goalkeeping that Ferguson was rumoured to want to sign Neuer for his team, but the young German says he was never going to move to Old Trafford.

“It was an honour for Sir Alex to say that about me even though we lost both games,” Neuer said.

“It wasn’t an option coming here (to Manchester) though because I wanted to join Bayern.”