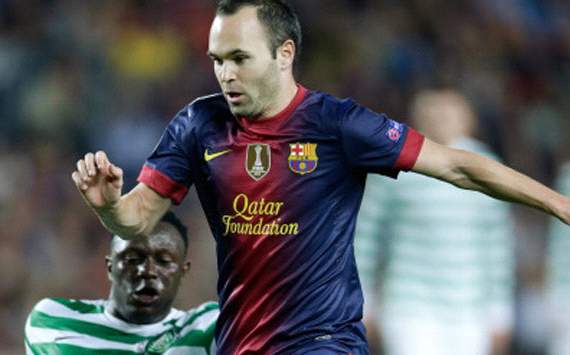 Manchester United manager David Moyes has placed Andres Iniesta on the top of his list of January signings after hearing that the Spanish international had fallen out with the Catalan giants.

While it may seem odd to think of the talented midfielder wearing anything other than a Barcelona jersey it would certainly be an audacious move if Moyes could lure the 29-year-old to the Barclays Premiership.

There are persistent rumours coming out of Spain that things are not going swimmingly between Iniesta and his Nou Camp bosses, and that for the first time in his career he is considering the possibility of joining another club rather than signing a new contract with Barca.

The talk is that he does not like the direction of the club since the departure of Pep Guardiola, and is still upset over the sacking of Physio Emili Ricart who had helped him combat a series of muscle injuries.

Should he decide that it is time to move on and end his midfield partnership with Xavi,  Moyes will be there eager to snap him up before anyone else has a chance.

This of course might be just a dream for United fans, but you have to remember they did try to sign Fabregas in the summer along with an attempt to lure back Ronaldo meaning that it could all depend on how serious Iniesta is in wanting a new challenge.