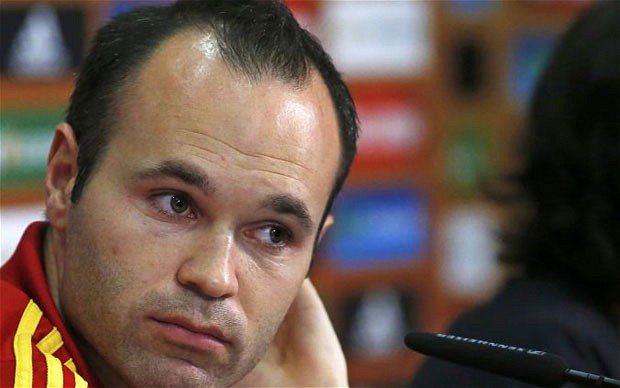 The Catalan giants are confident that they can sign a deal with Andres Iniesta to extend his contract with the club despite talk that Manchester United wants to sign the talented midfielder.

“I think it could happen before Christmas.”

Sky Sports’ Spanish expert Guillem Balague had earlier expressed his belief that Iniesta, who is out of contract in 2015, will sign a new deal with Barcelona.

“I’ve seen that the rumour of Andres Iniesta moving to Manchester United has attracted a lot of interest,” wrote Guillem.

“Barcelona are saying everything with his contract will be sorted before Christmas, but I’m not sure how they can be sure of the timing. The club almost announced that Victor Valdes was going to renew his contract (in fact, they said they were very confident it was going to be in place) but he is leaving.

“But before you get all excited, I have to tell you that Iniesta is not listening to offers from anybody.

“His agents are aware of interest not only from Manchester United but from every other big club in Europe. It’s logical that these kind of rumours come out when he is looking for a new contract but he has not asked for any information on anybody because his priority is to renew his contract with Barcelona.

“Even though he rejected the first offer from Barcelona both parties are saying they are very close. I just don’t see Iniesta going to Manchester United or anywhere else.

“I see him renewing his contract, so does Barcelona and so do Iniesta’s representatives. It’s just going to be a matter of time until he signs.”