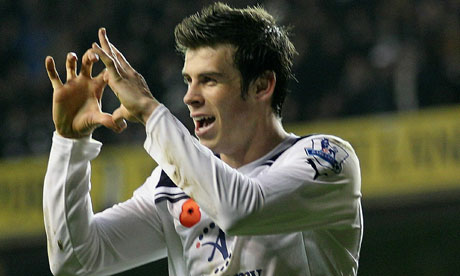 GARETH BALE has told Spurs he will stay if they finish in the top four.

The Welsh superstar is wanted by Real Madrid, Barcelona and Bayern Munich.

But boss Andre Villas-Boas revealed: “I have been assured Gareth will stay if we make it into the Champions League.

“That’s the information that I have from the club.”

Villas-Boas has stated many times previously that Tottenham need to finish in the top four to boost their chances of keeping Bale.

But this is the first time he has said the 23-year-old will definitely stay if they do so.

Club execs have assured him Bale will remain at White Hart Lane next season if that Champions League berth is tied up.

Boss AVB added: “The club are committed to keeping the best assets. That’s the only way we can ensure we are in the top four every year.

“Gareth is part of that project bearing in mind he has been amazing this season. Hopefully, we can develop him to a greater extent.”

This news will give AVB and his fifth-placed team a huge lift as they bid to finish in the top 4 of premier league this season. Already, they are bookmaker’s favorite for the top 4 finish ahead of Arsenal.

They travel to Wigan today knowing a win would put them back in the top four.

Bale’s form this season has led to him being nominated for both the PFA’s Player and Young Player gongs.

AVB said: “Gareth has had a major development this year.

“He has played in so many positions and has had such a big impact in those positions.

“We are happy that he has been nominated but we would be even happier if he was to win.

“The whole team would celebrate because the team, in the end, helped him have this wonderful year.”