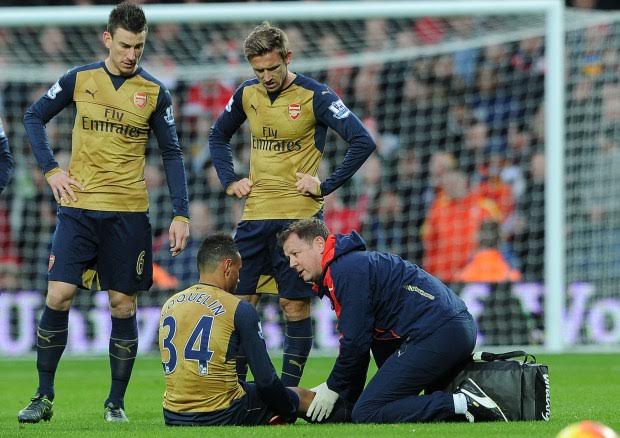 All Arsenal fans have been saying since the start of the season what will happen should defensive midfielder Francis Coquelin get injured, after manager Arsene Wenger failed to make a signing that could provide cover for the Frenchman during the summer transfer window.

And now it would appear that Gooners worst nightmare has come true after a 50:50 challenge with West Brom midfielder Claudio Yacob caused Coquelin to limp off the pitch just 14 minutes into the 2-1 loss against the Baggies at the Hawthorns yesterday afternoon.

After the match Wenger admitted that the injury could be serious.

‘Coquelin has a knee problem,’ explained the Frenchman.

‘It looks a little bit severe.’

Wenger had the chance to sign Southampton defensive midfielder Morgan Schneiderlin during the summer but baulked at the Saints £25 million asking price that Manchester United had no hesitation in paying.

Now Wenger may be forced to go to the transfer market in January, with every team knowing he is desperate for a DM, which means they will be able to get top money for their player.