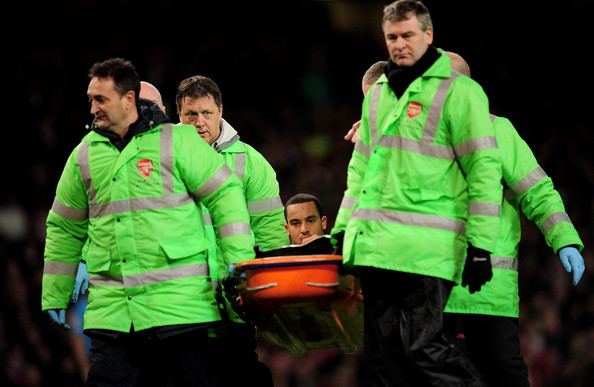 Arsenal and England international Theo Walcott is out for at least the next four matches and will miss England’s World Cup qualifiers.

The Arsenal star complained of abdominal pain ahead of Arsenal’s match against Stoke City and was withdrawn from the squad.

At the time Arsenal manager Arsene Wenger called the injury “a mystery” , but after further investigation it appears that the forward has damage to an abdominal wall.

As well as missing Arsenals next four games Walcott will miss the England games against Poland and Montenegro which will determine Group H and whether or not England go to the finals next summer in Brazil.

Wenger said: “Theo will be out for a few weeks. He has developed some damage to his posterior abdominal wall. It’s not a hernia, but it’s a little structural problem in his abdomen.

“He will have the procedure in Germany on Wednesday and, because it’s so minor, we can begin his rehab immediately.

“We are pleased it’s being dealt with quickly and he shouldn’t miss too many Arsenal matches. But he will miss the forthcoming international matches with England.”