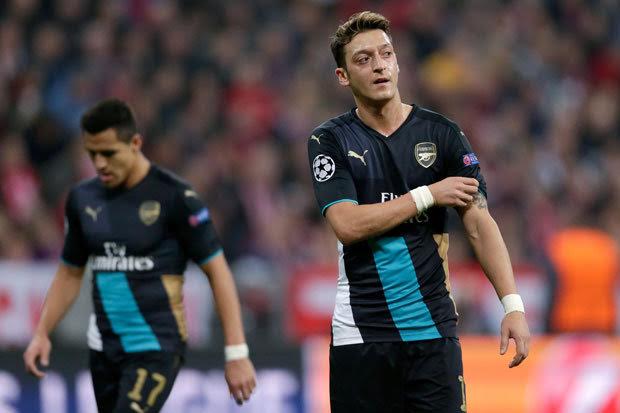 Former Gunner and now Sky Sports football pundit Paul Merson says he cannot believe what he saw watching Arsenal get hammered 5-1 by Bayern Munich during the week, but insists Arsenal will bounce back with a league win over Tottenham on Sunday.

Writing in his weekly column for the Daily Star Merson said: “I couldn’t believe what I was watching when Arsenal got thrashed by Bayern Munich. It could have been a cricket score.”

“I felt sorry for them because you can’t tell me those players went into that game with a game-plan. It was extraordinary.”

It reminded me of Barnet going to the Emirates in the FA Cup third round. The team Arsene Wenger has put together is supposed to be able to win the league.”

“He has big-name signings that cost loads of money there now like Alexis Sanchez and Mesut Ozil, and a top keeper in Petr Cech.”

“But they are still a million miles away from the top teams in Europe. When Theo Walcott doesn’t play they are pace less.”

“Arsenal can’t use injuries as an excuse though. When you go to Bayern you have to know you’re going to be under the cosh.”

“You have to keep it tight. But they haven’t got a clue how to do that. When I was at Arsenal we were well drilled.”

“We worked on having two banks of four and where we had to move when we didn’t have the ball. We came back to protect the full backs, and we kept our shape.”

“I don’t think Arsenal work on that at all and that cost them a place in the next round.”

“I remember playing AC Milan in Europe once. We thought we were a good team until we played them.”

“I think we only lost 2-0 but I can remember sitting there afterwards thinking: “Blimey.”

“That kind of thing can really knock your confidence. Saying that, I think they still have a chance of going through.”

“But what they don’t want to do is finish third. That would be a nightmare, ending up in the Europa League. That would cost them any chance they have of winning the Premier League.”

“If they don’t beat Spurs now there will be uproar. All the good work they’ve done over the last few weeks will go out the window.”

“The manager would be back under pressure and the players would be gutted. Will their confidence be shot after what happened in Munich?”

“I think Spurs will sit back because all the pressure will be on Arsenal.”

“Harry Kane is scoring goals and all the young players they’ve brought in seem to be doing alright. They’re buying into what the manager wants to do there.”

“They are still a long way behind Arsenal. I don’t think Spurs are in their class at all. Arsenal are way above them right now.”

“But even if Arsenal win it will just paper over the cracks for me. They need to improve a lot.”

“This is my problem with Arsene Wenger. He only knows how to play one way. There is no Plan B. Tactically, it’s not great.”

“You have to be better than that. It comes from the manager. Definitely. It’s like they just go out every game and play the same way whoever they’re playing.”

“If you keep doing that then eventually you’re going to come unstuck again. I just don’t think it will happen against Spurs.”