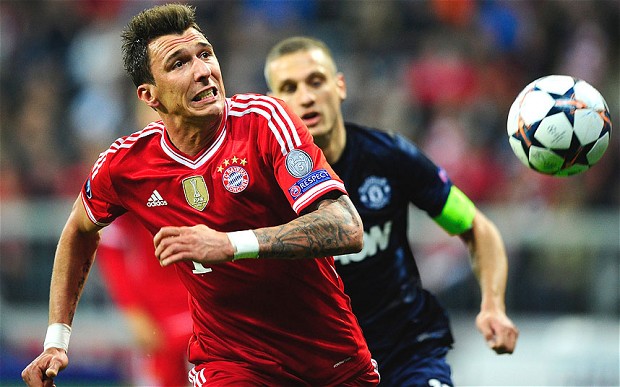 With Arsenal now conceding that they have lost the race to sign Atletico Madrid striker Diego Costa to Chelsea the Gunners are going to go all for Bayern Munich striker Mario Mandzukic.

Reports in Wednesdays Daily Express say that the Spanish international will join Chelsea for £50 million with Atletico Madrid coach Diego Simeone admitting he is powerless to stop the move, but admits Fernando Torres could be a part of the deal.

Arsenal is desperate to sign a world class striker this summer and with Costa no longer available have shifted their focus on to 27-year-old Bayern Munich striker Mario Mandzukic who despite not being a regular starter in Pep Guardiola’s team has managed to score 24 goals this season.

Bayern Munich meanwhile are insistent that the Croatia international is not for sale but with the imminent arrival of Robert Lewandowski from Borussia Dortmund this summer any bid by Arsenal of more than £20 million will have the Bavarians sit up and take notice.

“It depends on him and what he believes is best for his future. I will support any decision.”

“It is normal that Chelsea are interested in him. They have good economic potential. Eto’o is getting older and Diego Costa can do his work, but right now he’s ours.”

When asked about Torres returning to his former club:

“Fernando is always with us,” he said. “Obviously I have sent messages to him; he is very happy with everything that is happening to this team. He is always present, wishing us luck.

“Of course he would love to come back to the club he grew up in and where he was very happy.”

Simeone confirmed that Diego Costa will be ready to face Chelsea in the Champions League. “He is happy and well,” he said. “One more cut does not do anything to this tiger.”

Atletico are also interested in Loic Remy, another Arsenal target who is on loan at Newcastle from QPR.