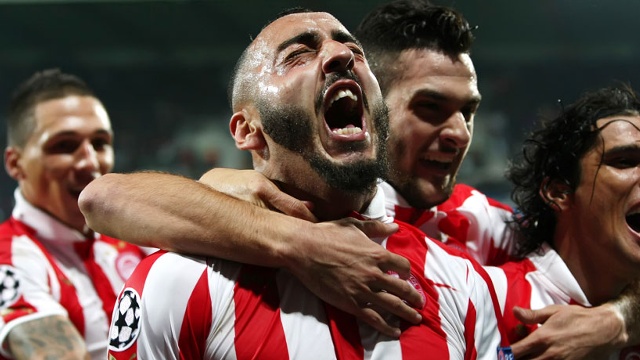 Arsenal and fellow Premiership club Liverpool are joined by a host of other European clubs looking to sign Olympiakos striker Konstantinos Mitroglou according to reports coming out of Greece.

Mitroglou was pivotal in his country’s World Cup play-off against Romania scoring twice in their 3-1 win, and has been red-hot for his club side Olympiakos scoring 17 goals in just 14 games.

Scouts from all over Europe have been arriving in Greece to watch the 25-year-old striker with Arsenal , Liverpool, Inter Milan, Genoa,Benfica and Borussia Dortmund all said to be interested in a top scoring striker that can be had for as little as £7 million.

He still has two years to run on his current contract with Olympiakos and sources inside Greece say he will wait until next summer before deciding his future.