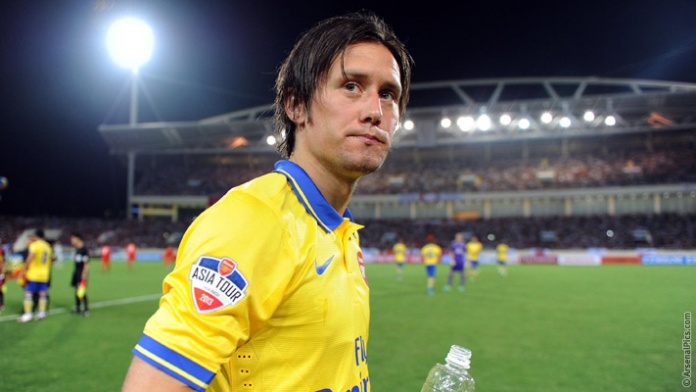 When the international break comes around, it is inevitable that questions would be asked of players who have not featured much for their clubs.

So it was no surprise that two of Arsenal’s high profile players Tomas Rosicky and Lukas Podolski were in the media spotlight in their country about their infrequent participation this season.

34 year old Tomas Rosicky hinted that several players have been affected by Arsene Wenger’s use of the same set of players.

“I’m not in this alone, there are other players in a similar boat. When we do get a chance it’s harder for us to get into our rhythm.”

The Czech captain like Lukas Podolski and Joel Campbell have just one start to their name this season, and that came against Southampton in the Capital One Cup in September, since then Rosicky has had just six substitute appearances which has not amounted to an hour.

Realistically, what are the chances that Tomas Rosicky, Lukas Podolski and Joel Campbell would get more playing time in the coming weeks?

The situation looks bleak as the trio occupies places in the team where Alexis Sanchez, Santi Cazorla, Oxlade-Chamberlain and the returning Theo Walcott play.

Although Tomas Rosicky can play in the middle, he has a battle in his hands to dislodge the likes of Aaron Ramsey and Jack Wilshere from the manager’s mind.

Ultimately, the best bet that they would be involved at all remains the possibility that Arsene Wenger would rotate his team to accommodate other players.

Rather bizarrely, rotation is not one of the strong points of the manger even though he has complained after some matches this season that his players looked jaded.

Yet he sticks with the same eleven players in almost every match while substitutions come very late when it is needed.

While, rotation might not suffice, there is the small matter of players who could be dropped for lack of form, Spanish midfielder Santi Cazorla comes to mind, he has struggled to impose himself in matches his season, and most of his best impressions have been disappearing acts in matches rather than coming to the fore when he is needed, added to that, his deliveries from set pieces have been a sore point of his game.

Although he remains one of the highest suppliers of chances for Arsenal this season, his overall contributions this season has been below his usual standard which is reflected by the fact that he has not scored a league goal since January.

Others would make a case that Tomas Rosicky should be given a go in the box-to-box role instead of Aaron Ramsey.

The Welsh midfielder’s form has tailed off, and the Czech captain has the experience, tackling ability, and pace to play that position, with the added defensive awareness that comes with being deployed in that position.

While, the complaint of Tomas Rosicky and Lukas Podolski are understandable as they are internationals, having to see players who are struggling for form while they remain on the bench could be frustrating, and the manger’s persistence of using same players as well as his penchant for playing players out of positions especially in defence ala Nacho Monreal and Calum Chambers could have had a negative effect in the player’s mind.