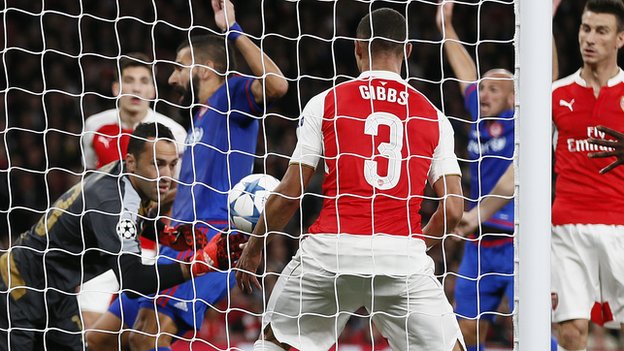 It must feel like Monaco all over again for the Arsenal faithful after the Gunners slumped to a home loss against a Greek side Bayern Munich easily beat 0-3 in Athens just two weeks earlier.

This time however it could mean that Arsenal will not make it out of the Group stage for the first time in 16-years following the 3-2 loss at the Emirates to Olympiacos and the 2-1 away loss to Dinamo Zagreb, while Bayern Munich demolished the Croatians 5-0 tonight in the Allianz Arena to remain top of Group F.

Arsenal’s next two Champions League games are back-to-back matches against the Bundesliga Champions, and should they not manage to get at least a point in one of those it could be all over for any Champions League aspirations they might have had before the start of the season.

Questions once more will be asked of Gunners boss Arsene Wenger not buying a striker over the summer, and following Ospina’s howler why the hell did he rest the one player he did sign Petr Cech?

Perhaps last weekend’s win over Leicester City had the Gunners boss thinking that he could afford to rest players for the match against Olympiacos, following Bayern Munich’s easy victory, but what perhaps Wenger and the rest of the Premiership teams seem to have forgotten is that there are several top teams in Europe who are head and shoulders above any club in the Premiership, and we are not talking about the calibre of teams that just beat Arsenal, but the likes of Real Madrid, Barcelona, Bayern Munich and even Juventus, who on a bad day could beat anything the Premiership has to offer.

Have a listen to what Arsenal legend Ian Wright had to say about the team’s performance in the BT Sport video below.