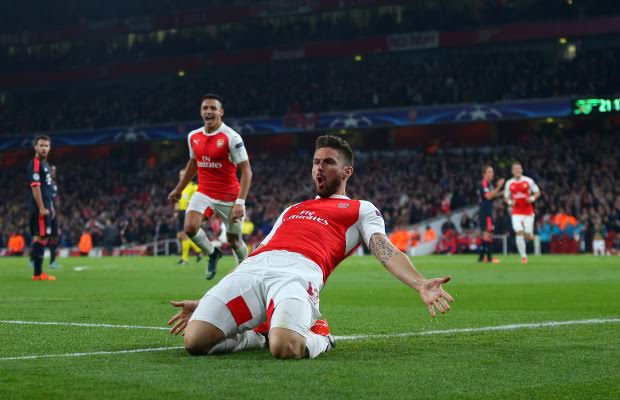 As we all wait anxiously for tonight’s Champions League clash at the Emirates between Arsenal and the seemingly unstoppable Barcelona it is hard not to be a little jittery feeling as though our team could be in for a good hiding while looking at trainer Luis Enrique’s front line of Luis Suarez, Neymar and Lionel Messi.

Thankfully for us the fans the players are not feeling the pressure and believe that the win over German giants Bayer Munich back in October has given the team the belief that they are good enough to beat Barcelona as well.

Speaking ahead of tonight’s match Gunners striker Olivier Giroud has said that he and the rest of the team are up for it and believe they can win.

‘We would love to beat them because they look unstoppable. We need to play our best game and being all together and at 100 per cent, of course,’ Giroud told the Mirror via Metro. ‘Otherwise we’re not going to play this game to lose it.

‘We are confident, we need to be confident and play the Arsenal way. After, we’ll see. We did well against Munich. We know that we can beat big teams but there is one thing for sure: that we need to be at 100 per cent and determined.

‘I think it will be a different game than against Bayern. We can do very well in the Champions League. We just need to focus and give 100 per cent all together with good team cohesion.

‘We managed that against Bayern and that will help us to win tomorrow.’