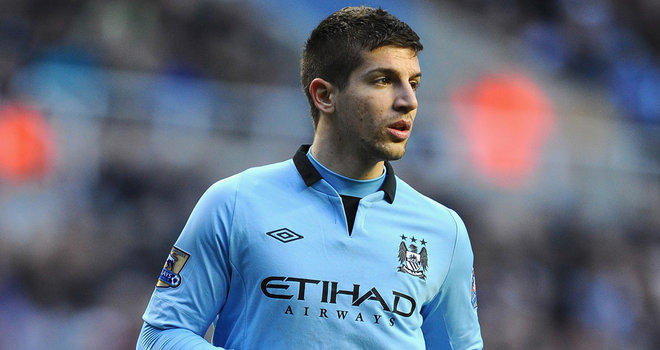 According to reports, Arsenal and Tottenham Hotspur have been offered Matija Nastasic by Manchester City ahead of the January transfer window. He is expected to be available for a cut price fee of £5 million.

The 21 year old Serbian defender has not featured much this season, after falling down the pecking order at the Etihad; he was the key figure alongside Vincent Kompany when he first arrived at the blue side of Manchester in 2012 from Italian side Fiorentina.

However, his stock has fallen in the last two seasons following the arrivals of Martin Demichelis and Eliaquim Mangala in the last two summer transfer windows. As a result he has found game time hard to come by, and making the match day squad has been quite a task for the 6ft 1in defender.

He was initially linked to Arsenal in the summer. There were strong speculations at the time that he could be the replacement for Thomas Vermaelen. But no move materialised out of the various speculations that trailed his link to Arsenal.Manuel Pellegrini stated in the summer that the player was free to leave the Etihad Stadium, and so far that verdict by the Chilean has been reflected by the fact that he has not featured at all this season in the Premier League.

Arsenal on the other hand could make do with such a defender, he has been in the Premier League for a number of seasons now, and he knows the league very well. Now that Manchester City is willing to cut him loose, it means that they are not averse to selling him to a rival within the Premier League.

Arsenal’s defence has been repeatedly exposed this season. And the defensive woes have been exacerbated by the Achilles injury which has kept Laurent Koscielny sidelined for over a month. It meant that Nacho Monreal has had to deputise for the French defender in central defence. A role that is completely alien to the former Malaga left back.His obvious lack of understanding of the role of a centre half have been repeatedly exposed anytime he comes under pressure from the opposition.

Per Mertesacker has also struggled in defence in light of Koscielny’s absence, and the fact that he has had to play with two inexperience players in Calum Chambers and Nacho Monreal who are getting to learn the position they currently play.

For the £5 million that has been mooted in the reports linking Nastasic to the Emirates, it would be an absolute steal to get a player of that status for such a low fee considering the dynamics of the current transfer market. Manchester City have a track record of dispatching players that are no longer part of their plans on a cheap transfer, Carlos Teves was sold to Juventus last season for fee of £4 million.

Arsene Wenger would do well to seize the opportunity to sign the 21 year old from Manchester City if the fee being thrown around is correct. It means the club can afford to move for a defensive midfielder, with the reported £20 million that is the budget for January after £5 million would have been spent on Nastasic.