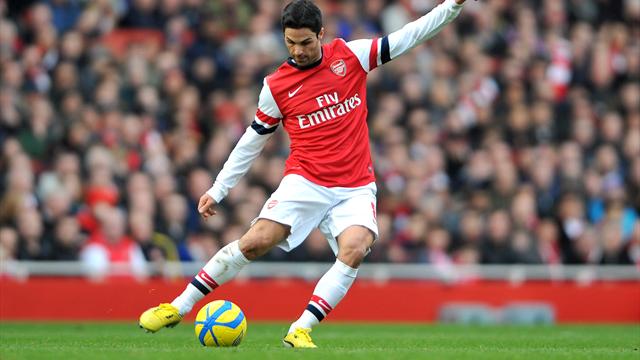 After seeing Everton creep past them into fourth place following a 0-1 away win at Sunderland Gunners midfielder Mikel Arteta feels that Arsenal must now take maximum points from their remaining five games if they hope to qualify for next seasons Champions League.

Following the epic extra-time and then penalty shootout against Wigan to reach this seasons FA Cup final against Hull City Arteta knows that there will be some tired legs on the pitch Tuesday night when they take on West Ham in the first of their remaining five games with Alex Oxlade-Chamberlain, Aaron Ramsey, Nacho Monreal and Santi Cazorla all in doubt for tomorrows match at the Emirates.

Speaking about the Champions League Arteta said to the Daily Mirror: “I think it’s still there for us. There’s still a long way to go – there’s four weeks until the end of the season.

“I believe we can do it, but we need to win all our remaining championship games. If we don’t, then I don’t think we will do it.

“It’s about confidence and it builds a bit of enthusiasm. The cup final gives us something to look forward to at the end of the season because on Tuesday there is another massive game coming up.

“We will have to see what we have available because we lost a few players as well. Let’s see what we’ve got, prepare for the game the best way we can because West Ham will be tough opponents again.

“You have some tough moments and I don’t know of any team in the world who win a competition who don’t go through a difficult moment in that competition.

“We went through the most difficult moment in this season’s FA Cup even though we’ve already played Tottenham, Liverpool, Everton and now Wigan.

“We have a lot of young players who I hope will be back soon! I hope they will be back nice and fresh. But on Tuesday we need everyone back and fit because that game is so important.”