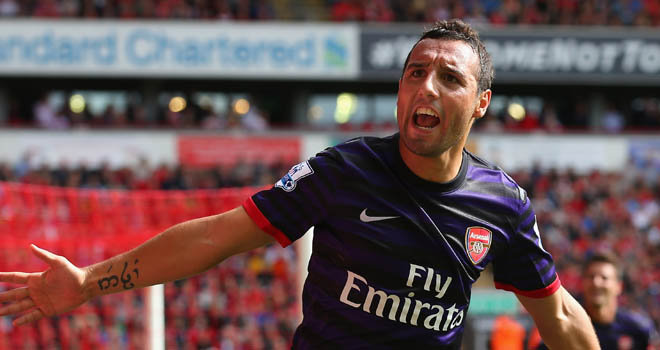 Arsenal midfield play maker Santi Cazorla will turn 30 in December and knows that the clock is ticking on his career and despite his success on the international stage with Spain the Spaniard wants to win trophies with Arsenal as well.

“I want titles and that is why I came to Arsenal,” he says. “Every football player wants to win titles. We’ve gone many years without winning one. And if not, what I’ll look for in my next destination is to have the chance to win.

“I don’t want to close doors, but nowadays I’ve a contract with Arsenal for two more seasons. When I’m turning 31 I’ll evaluate myself and I’ll choose the best option. In which case, I would be delighted to come back [to Spain].”

The Gunners have now suffered a setback in their title winning chase and will be in a tough fight with Everton for fourth, but the one ray of light that still remains is the FA Cup, and knows that a win against Wigan at the weekend will see them in the final.

“We’ve been unlucky in several games. We had a lot of chances to win against Manchester United and there was Ozil’s penalty (against Bayern),” he told sport360. “We couldn’t recover after going out against Bayern in the Champions League.

“We haven’t got a winning mentality and we have to believe in ourselves (more). Sometimes you can get used to not fighting, but we can’t do that. Arsenal is and will always be a historic football club, we have to look forward.”

By these remarks the Spaniard was referring not only to the players but the board of directors in an effort to see them spend money in order to bridge the gap at the top between Arsenal and the big spending clubs.

“Arsenal has everything to win,” he adds. “History, infrastructure, an incredible stadium and great players.

“But we have to improve at crucial moments and sign the best football players because if you don’t do that, you may lag behind others.

“That is what makes it different at other clubs. You’ve a good example in Manchester City who signed Fernandiho, (Alvaro) Negredo… or even Manchester United with (Robin) Van Persie and (Juan) Mata.

“Arsenal know what they need next season, but it’s almost impossible to win a title if we haven’t got these kind of things.”