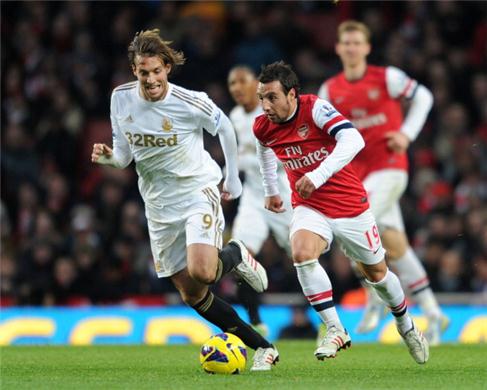 With all eyes on the FA Cup final knowing that the title race is over Arsenal could still finish second in the table after having won nine out of their last ten games while showing Chelsea that they will be prepared to give the west London side a run for their money next season.

Once more the Gunners boss will be expected to pick an unchanged side after having done so for the previous four matches in the hope of avenging the 2-1 loss the Gunners suffered at the Liberty Stadium back in November.

Gary Monk’s team should put up a good fight however, as Swansea chase a place in the Europa League, and with only one loss in their last six games the players will be arriving at the Emirates full of confidence.

Wenger will probably star David Ospina as he did against Hull, but given the fact that only the FA Cup final is on the horizon we would prefer to see him give the playing time to Wojciech Szczesny.

In the heart of the Gunners defence will be Per Mertesacker and Laurent Koscielny why youngster Hector Bellerin will start as the right wingback with Nacho Monreal continuing on the left for the ousted Gibbs.

Here we will see the battle hardened Francis Coquelin continue his standout season in front of the back-four and given Ramsey’s 50/50 chance of a start we go with Walcott to get the nod over Wilshere where he will play opposite to Alexis Sanchez.

Up front once more will be Olivier Giroud as the solitary striker, but with news that real Madrid might be willing to sell Karim Benzema in the summer we would urge Arsene Wenger to look into it as he just cannot rely on Giroud week in week out.