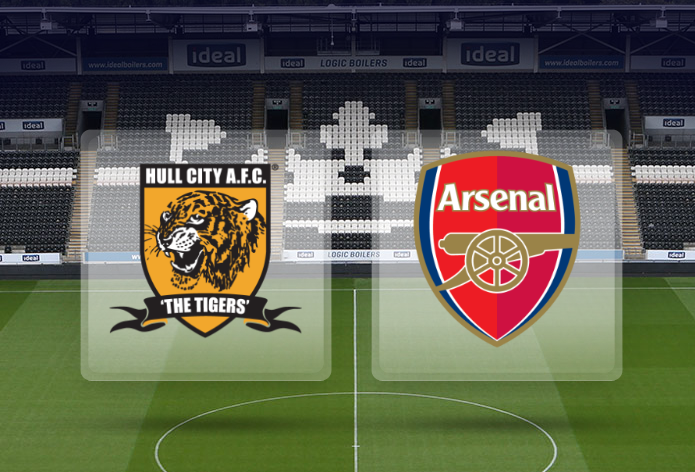 Arsenal takes on Hull City at the KC Stadium tonight with the Tigers poised just one point above the relegation zone, but full of confidence after having beaten Liverpool 1-0 midweek.

With Chelsea now having won the Premiership title we would expect Gunners boss Arsene Wenger give some of his over stretched players a rest now that the FA Cup is the only thing left to play for as nobody ever remember who finished second in the league.

Colombian International goalkeeper David Ospina could be playing his last match of the season, as we are sure Wenger will stick with Polish keeper Wojciech Szczęsny for the Cup Final, and judging his last nervous performance could probably do with getting some game time under his belt before stepping out at Wembley.

Here the major change will be Gabriel in for Per Mertesacker along with Gibbs in for Monreal with Laurent Koscielny and Hector Bellerin in their usual positions.

Wenger might look to rest Santi Cazorla for this match using the now fit Jack Wilshere, and although we think Coquelin should start both Arteta and Flamini are biting at the bit to get back into the team. Mesut Ozil will play just in front of the holding pair with Alexis Sanchez and Aaron Ramsey out on the flanks. As we have already side this is the perfect opportunity for Wenger to rest players so don’t be surprised if Walcott either starts or takes the place of Ramsey at some point.

Work horse Olivier Giroud has been the go to guy all season for Arsenal goals, but now would be a perfect time to rest the Frenchman and allow Danny Welbeck to spearhead the attack.