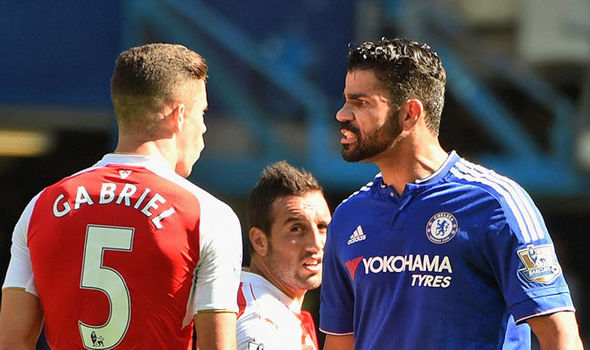 Chelsea bad boy Diego Costa was instrumental in the sending off of Arsenal defender Gabriel on Saturday, and has Gunners boss Arsene Wenger calling on referee Mike Dean to watch a tape of events leading up to the red card, and issue the Spaniard with a three-match man.

Meanwhile Gunners legend Martin Known was not afraid of mixing it up on the pitch during his playing days saying he would have relished the chance to go up against a player like Costa.

“Once in a while I wish I could beam a current player back to my era so I could play against them. Diego Costa is top of that list,” Keown wrote in his column for the Daily Mail.

“I was a little bit crazy and I’m pretty sure he is too, so I’d love to go toe-to-toe with him and show him that I wouldn’t be bullied by him.

“Costa has a black belt in the dark arts. He plays his opponents as much as he plays the match, constantly trying to draw a reaction from and bully defenders.

“He crashes into them from the off, scratches them, whispers who knows what in their ear; he never leaves it alone. He is so macho that he never backs down.

“He has to have the last word, the last shove, the last flick.

“It used to be that a defender would set the tone in a match with a first clattering challenge on the striker he was marking.

“With Costa, it’s the opposite. He smashes into the defender who is marking him as soon as possible, looking for a reaction or an almost inevitable retaliation a few minutes later.

“Then he goes straight down in a heap or immediately over to the referee, waving imaginary cards and trying to get people in trouble.

“He’s on the edge but he plays that game perfectly, testing defenders each week. Who is brave enough to take me on? Who wants to tango?

“The clever thing about Costa’s approach is that he has worked out more or less where the line is with regards to getting sent off.

“He slaps rather than throws punches, he flails his arms rather than elbows and he winds people up with words.

“He also puts his head in his opponent’s face because he knows they won’t like it. There’s the apparent scratching too as we saw on Gabriel’s neck.

“He just wants that reaction, to get an opponent sent off.

“It worked against Arsenal with Gabriel the man to go. But the way Costa went about it leaves a really sour taste in the mouth. He won’t care.

“In fact, he will probably have got a pat on the back from Jose Mourinho after the game and a wink of appreciation from his team-mates.”