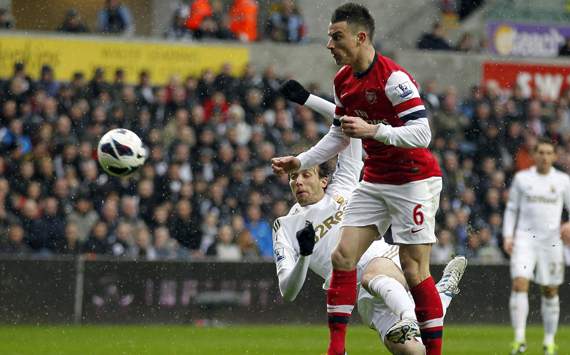 Arsenal must be prepared to fight off Paris Saint-Germain, Monaco and Bayern Munich in order to convince defender Laurent Koscielny to sign a new contract at the Emirates.

The Frenchman has been one of Arsenals most consistent players this season, and has developed into one of the best defenders in the Premiership.

This form however has not gone unnoticed by some of the continents heavy weights all aware that the Arsenal defender earns a modest £50,000 per-week some £40,000 less than his teammate Per Mertesacker who just signed a new deal with the Gunners last month.

Everyone is now watching to see if he will be offered the same deal as his German teammate with some putting together their own deal in order to try and lure his away according to Thursdays Daily Telegraph, who also say that their sources in France say that Manchester United is also interested in the 28-year-old.

Last year Koscielny made his desire to win silverware known when he said: “I want to lift trophies and to have a winning record. I hope the club will give me the means. If this weren’t the case, I’d look elsewhere. I want to win titles and I hope the club have the means.

“I feel good at Arsenal and if the club can compete with the best, I have no reason to leave. But if it fights every year for Champions League qualification it’s hard psychologically to be under such constant pressure.”

Arsenal are in the FA Cup final and have had a Champions League qualification boost after Everton slipped up by losing 2-3 at home to Crystal Palace.