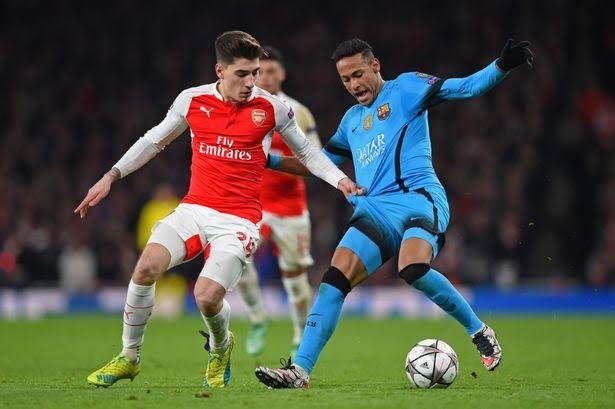 As Gooners watched Arsenal effectively crash out of the Champions League on Tuesday night at the Emirates to Lionel Messi and Co. following the 0-2 loss, some effectively more damage was done following an impressive display by Gunners right-back Hector Bellerin.

The 20-year-old Spaniard graduated from Barcelona’s famous La Masia academy after having spent eight years at the club before moving to England to play football in 2011.

At the time Bellerin knew that his chances of ever getting into Barcelona’s first-team at the Nou camp would be difficult, and with Arsenal playing a similar style of football to Barcelona decided that a move to London was just what he needed to kick-start his career.

Following the Champions League draw, when he knew he would be playing against his former club he said: “I had been there for so long but I never played for the first-team, only the academy. I have a lot of respect for the club. It will be special to go back where it all started and walk out at the Nou Camp.”

His grandmother is also excited about seeing him playing at the Nou Camp with Arsenal, but could not help having a dig by saying he will be wearing the wrong shirt.

This however could be about to change with Spanish football newspaper Sport claiming that both Andreas Iniesta and Gerard Pique both spoke with Bellerin regarding his situation at the Emirates while knowing that a spot in Barca’s line-up could open up once 32-year-old Dani Alves leaves the club.

Should Bellerin decide to return to the club where he grew up it would be a huge blow for Arsenal, but as we have seen in the past with Cesc Fabregas, Thierry Henry, Alex Song, Thomas Vermaelen and Alexander Hleb the magnetic appeal of the Catalan giants can be hard to resist.