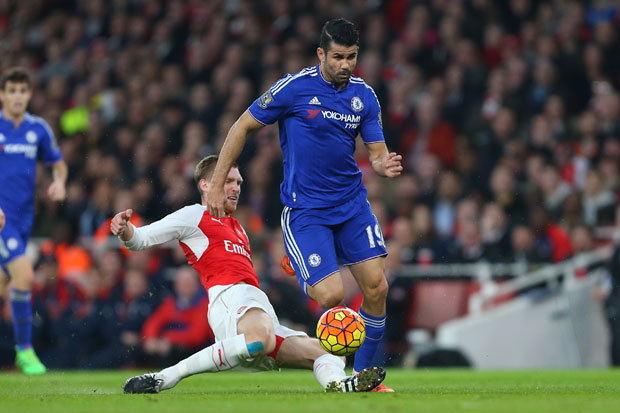 Following yesterday afternoon’s 0-1 loss at home to Chelsea, Arsenal legend Liam Brady says that the fans should not blame Chelsea striker Diego Costa for the loss.

Costa has been the centre of attention both times the clubs have met this season, yet unlike the first game in which the Brazilian born Spaniard was responsible for getting Gabriel sent off former Gunner midfielder Brady believes this time referee mark Clattenburg made the right call.

“Diego Costa was without a doubt the villain of the game at Stamford Bridge, but I don’t think you can blame too much on him yesterday,” he told the Alan Brazil Sports Breakfast.

“It was a sending off, Costa was through on goal. If Mertesacker watches that again I think he’d feel he should have let Costa take his chance and let him go on goal. He had Petr Cech to beat and Koscielney would have put him under all sorts of pressure and he might not have scored.

“With 11 men we could have won the game. The team played well in spells and with ten men we had a few great chances to score and get the draw.”

Arsenal is now tied in second place with Manchester City trailing Leicester by three points with Brady confident that Arsenal can still win the title.

“If you look at the table, it looks like the title race is between four teams – the current top four,” he added.

“If Arsenal can stay around the top for the next five or six weeks, get good results against Leicester, Spurs and Manchester United and win against the other teams, then I think we’re in with a great chance of winning the title this year.”