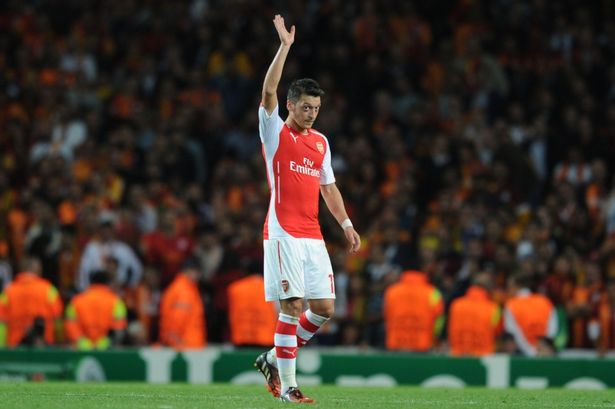 Gunners record signing £42.5 million Mesut Özil has struggled to find any form while at Arsenal, and are currently out until the New Year with a knee problem.

Meanwhile Arsenal boss Arsene Wenger has reopened his battle with the German Football Federation after claiming Özil came back from the World Cup injured.

The German playmaker tore knee ligaments during a 2-0 loss to Chelsea back in early October, but still managed to play a full 90 minutes before reporting for the German national team where he then had a scan done.

Speaking yesterday to beIN Sport Wenger when asked about Özil the Gunners boss said: “He will not be back until January. He came back from the World Cup with an injury.” Wenger then added, “he had a very good first season with us. I think we will see the best of Özil in the seasons to come.”

When asked about the often injured Abou Diaby who has only managed to make 22 appearances in four-years Wenger said: “He is a player that I have an enormous amount of respect for.

“Everytime he comes back, he has to start from zero with another injury. He was a victim of competition.

“A footballer needs his ankle. He was destroyed by a bad tackle [by Dan Smith on May 1 2006, which left Diaby with a severe ankle fracture] at Sunderland six or seven years ago which altered his ankle.”

“He is not a fragile player. He was the victim of an assassin’s tackle that went unpunished.”

When asked if Arsenal had tried to sign Paul Pogba Wenger replied: “We were interested by Pogba when he was at Manchester [United].”

“We tried to get him, but it was complicated. I was surprised to see Manchester let him go. We did not have the right to contact him.”