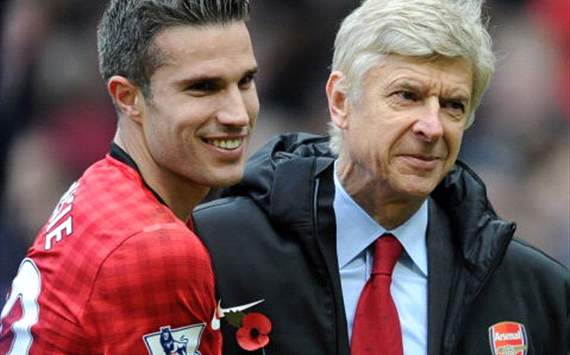 Arsenal boss Arsene Wenger has admitted that it is difficult to look at Robin van Persie wearing any other jersey than Arsenals.

Wenger however will be forced to see the Dutchman in a Manchester United shirt when the Gunners travel up to Old Trafford on Sunday, for the weekend’s biggest match.

“Of course it’s strange because for me he is an Arsenal man,” Wenger said.

“I took him when he was a very, very young player. We have gone together through very difficult periods and he became a world-class player and for me he is an Arsenal player.”

Wenger also said it was RVP’s talks with then Manchester United coach Rene Meulensteen who convinced the Arsenal striker to join United.

“Robin van Persie had been convinced by the Dutch coach who was at Manchester United, (so) that played a big part,” Wenger said.

“It is the head-to-head talks I had with van Persie many, many times that convinced me that I had to sell him.

“I think in the end I had to decide ‘do I do it or not?’ knowing I will get huge criticism for doing it. But I just decided because at the end of the day I felt it was the best thing to do.”

Wenger went on to say that this weekend’s match with United will be a true test to how good Arsenal is this season.

“It is still one of the benchmarks of the season where you judge how strong you are,” Wenger said. “People analyse everything, your behaviour, and draw conclusions after the game.

“It is still one of the big games where you can gain confidence and credit for good behaviour.

“We had periods where we did very well at Old Trafford but recently we have not done so well and this is a good opportunity to show we have improved. We can win there and that is our target.”