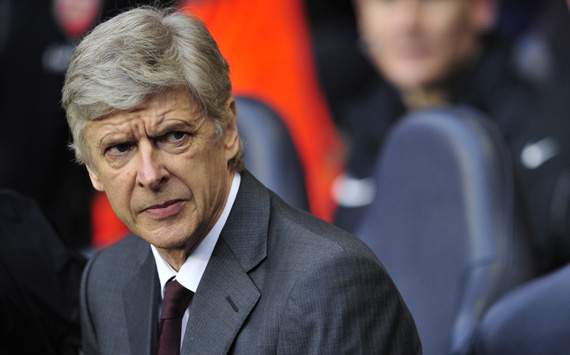 Arsenal manager Arsene Wenger has said that he feels no pressure to sign a new striker in January.

The Gunners boss told reporters that it is difficult to find the right kind of players during the January transfer window, and stressed that the return of Theo Walcott to the team alleviates the need to buy another attacker.

Walcott will be available to face his former club Southampton on Saturday after spending the last eight out following minor abdominal surgery.

Meanwhile German international Lukas Podolski has been out with a hamstring injury, but is expected to be back by the end of December.

Despite the fact that Arsenal have been playing with only Oliver Giroud up front, and that Nicklas Bendtner will most likely leave in January the 63-year-old Wenger is not worried knowing that Walcott and Podolski will be available.

When asked if Walcott and Podolski alleviated the need for a striker in January Wenger said:

“Yes, Podolski is not back as well (yet), but he shouldn’t be too far now.

“Theo gives us an opportunity to be a mobile striker. If we lose Giroud today we have nobody with body weight up front, apart from Bendtner.

“I think Bendtner has the level, but at the moment he doesn’t get enough games – and as well, in his head, is he here or has he planned to go (in January)?”

Wenger went on to say: “Theo gives us qualities that other players haven’t got, it is a different option.

“We have a lot of players who like to come to the ball, so to have one or two who go behind and create space in the middle, it gives us options to score.”

Arsenal fans have all heard the rumours about the possibility of Karim Benzema being signed from Real Madrid, and when asked if he would sign anyone in January Wenger replied that it would only be for the “right player.”

He added: “I don’t say I never make a mistake – I certainly made some, sometimes it is because we didn’t sign the right player.

“But it is always difficult in the middle of the season. If somebody is doing well somewhere, the clubs do not necessarily want to sell him. They can wait until the end of the season.

“Most of the time it is because we didn’t find (him).”