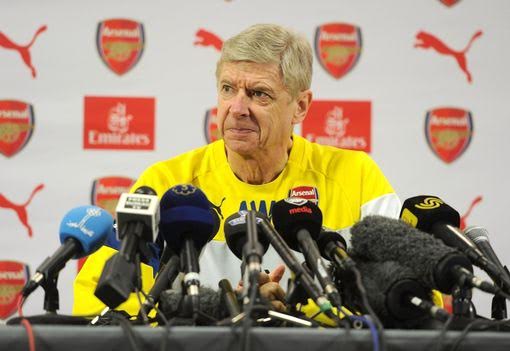 At this morning’s press conference prior to the Gunners opening match of the season against West Ham at the weekend Wenger speaks out about Chelsea being everyone’s favourites to retain the Premiership title, while having a go at the FA for starting the season a week earlier.

“We’re ready for a fight and we’re motivated to start well. One of our targets is to start strong.” Said the Frenchman, while adding: “I’m massively against the early start, we have no Christmas break yet we start one week earlier.”

“We were not consulted at all Fifa rules say you need four weeks’ holiday.

“If we start any earlier with the youth team.

“These decisions in meetings where we are not involved. Any doctor tells you bones take 6 weeks to heal completely.”

On the Premier League title chase: “Chelsea won it by a margin last year so they must be favourites.”

And the Gunners boss doesn’t rule out making additions before next month’s deadline.

“I’m happy with the squad, if someone turns up then we can still do it,” he adds.

“We are ready to fight for the championship.

“We missed our start to the season last year; let’s try to start strong.

“But we have a difficult start with two derbies and Liverpool in our first three games.

And on links to the Real Madrid striker: “I never came out on Benzema, it’s just media talk.”

Better news for Arsenal is the return of Alexis Sanchez from his late summer break.

He, of course, was on Copa America duty after the season ended, delaying his return.

But Wenger has confirmed he WON’T be playing this weekend.

“He came back in good shape and should be available to play in 10 days.”

Wenger yesterday confirmed Mirror Sport’s story that Wilshere is out for several weeks.

I had a bad surprise because it is a hairline crack in his fibula that makes him a few weeks out.

“There is minimal damage apart from the bone damage – there is no damage at all apart from that. It was a collision in training and it was all completely accidental.”

And today he says the midfielder is upbeat.