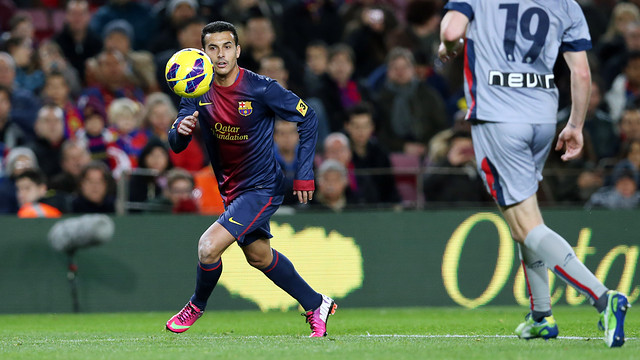 Arsenal and Liverpool both continue to watch the progress of Barcelona striker Pedro with an eye to signing the 26-year-old in the summer.

The forward has seen very little play at the Nou camp this season leading to speculation that he would like to go out on loan in January to get more playing time ahead of next seasons World Cup in Brazil.

Despite saying he is happy to stay at Barcelona the Spanish international has admitted he is open to a move if things do not improve.

“I am happy with Barcelona, but things have to be evaluated every season,” he said.

“My goal is to try and stay at this club where I feel very valued and loved.

“When you play less you do not feel less important, but it is true that you notice playing fewer minutes and it is different.

“But I must fight for my only goal, which is to continue with Barca.”

Pedro managed to get some playing time in last night’s 5-2 win over Getafe where he scored an incredible hat-trick in just eight minutes to show why the English clubs are interested in him.