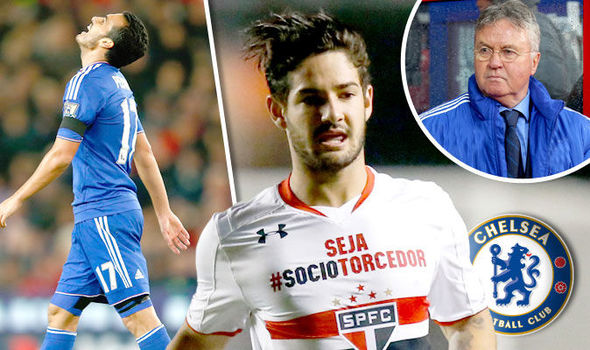 Chelsea are closing in on a deal to bring Corinthians striker Alexandre Pato to Stanford Bridge after having agreed personal terms with the 27 time capped Brazilian international.

And while the former AC Milan forward may prove to be a big hit after having been given his second chance of playing in Europe, do not expect him to hit the ground running as he has not played a match since last November,

Chelsea have also been involved in a tussle with Shakhtar Donetsk over attacking midfielder Alex Teixeira, and have just seen a £30 million offer for the Brazilian turned down by the Ukrainian outfit.

Chelsea are also looking at other targets to improve their goal scoring with striker Carlos Bacca and West Brom forward Saido Berahino potential candidates for a striker position at the West London club, while interim manager Guus Hiddink is still reluctant to let Frenchman Loic Remy leave so that he can get regular football.

A new striker would however allow the Dutchman to get rid of Radamel Falcao, with hope still that they can reach an agreement with Monaco to end his loan spell at Stamford Bridge early.

Some good news for the Blues is that right-back Branislav Ivanovic is expected to pen a new deal with the club, while centre-back Papy Djilobodji looks to be on his way to Bundesliga side Werder Bremen after having only played one minute of football for Chelsea following his £2.7 million move from Nantes on deadline day.

Other news regarding players who are on the way out may come as a surprise with the Daily Express claiming Chelsea have already given up on £21m former Barcelona winger Pedro and that he will be sold come the summer.