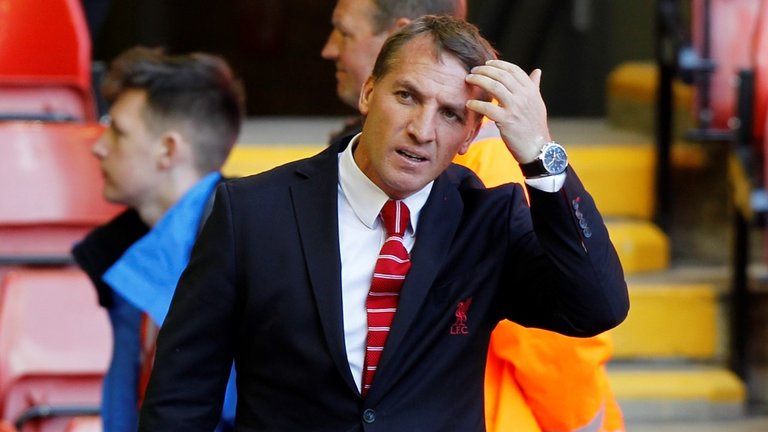 Following a very disappointing 2014/2015 season Liverpool have some tough decisions to make as they try to compete with the big boys of the Premiership.

After having challenged for the tile just one season earlier Liver pool finished a poor sixth this season 25 points being title winners Chelsea.

While it is true to say that the Reds lost their best striker Luis Suarez to Barcelona and that second leading scorer Daniel Sturridge was out most of the season through injury, manager Brendan Rodgers now faces the prospect of still worrying if Sturridge will find his old form while knowing that captain Steven Gerrard has left for the MLS and that one of the clubs most talented youngster Raheem Sterling also wants to leave, which Sky Sports pundit Jamie Redknapp says all adds up to a summer of big decisions.

“It’s going to be a difficult summer,” he told Sky Sports’ end of season review show.

“Gerrard is leaving, you’re going to have the Raheem Sterling debacle, which is going to run and run and run, then what do you do with Mario Balotelli? Keep him or sell him?

“It’s going to be the toughest season for Liverpool in many, many years. There are so many players I feel aren’t good enough to play for Liverpool and maybe their future isn’t there, but how do you get them out of the door and then get the right players to come in?

“If you think Rodgers is the right man, do you trust him with another £100m? That’s a problem for him because the recruitment this year hasn’t really worked, the players they’ve bought in haven’t been of the top level of the players who have gone out.

“At the time I said I didn’t think they’d do what Tottenham did, but it’s very similar to when Spurs sold Gareth Bale. The players that came in weren’t at the top level.

“Sometimes you’re better off buying one superstar rather than seven or eight and hoping they’re all going to settle – because they haven’t for Liverpool. They haven’t been able to make up the difference between what Luis Suarez brought them.”

Redknapp believes that Rodgers will still be in charge next season, but he must act quickly on the Sterling front while at the same time find a way to attract top talent despite competition from the Premierships top clubs who will be playing Champions League football next season while Liverpool will not.

“I would keep Rodgers after the job he did last year, when they played some fantastic football,” he said. “But when you’re getting beaten 6-1 at the end of the season it doesn’t do you any good whatsoever.

“Are you going to trust him with another £100m? Because that’s what I genuinely feel it needs.

“The Raheem Sterling situation is a very difficult one. When you’ve got a 20 year old wanting £150,000 a week, allegedly, that’s so hard as a club. Do you give him that and then give yourself a real problem with the wage structure? Or do you try your best to go and get yourself £50m-£60m? The other problem with that is a large chunk has to go to QPR because they’ve got a sell-on.

“When Liverpool lost Suarez – and look what he’s done at Barcelona – what they’ve done hasn’t surprised me. Daniel Sturridge has started seven games this year and that’s unfortunate for the manager.

“They need a centre forward and they need to try to find somebody. The problem is, Chelsea are going to be in the market for a striker because they’ve lost Didier Drogba and Manchester United, if Robin van Persie and Radamel Falcao leave, they’re going to be looking for a striker.

“Everybody’s in the market. Thierry Henry’s don’t come around very often! These players that can make a real difference in the Premier League are hard to find.”