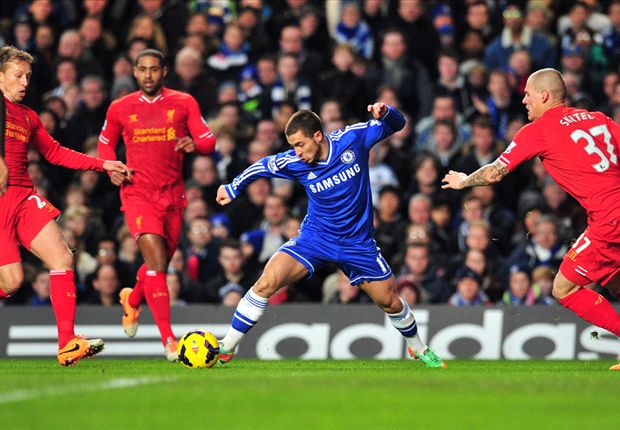 Chelsea picked another three points away from home in the week 11 early kick-off fixture against Liverpool at Anfield – a result which will go ahead to consolidate their lead in the league table while leaving their host dejected and worn out after the game.

There was much talk going into the game about both managers’ tactics with Red’s boss Brendan Rodgers resting most of his key players in their midweek champions league match against European champions Real Madrid.

Those gamble would be seen as one too costly as the rested Liverpool team will loose 2-1 to Chelsea hence, leaving them 15points behind the league leaders.

The match is one which brought a lot of issues into full glare but here are five things we learnt from the game.

Chelsea Looked Comfortable ThroughChelsea once again demonstrated why they are currently topping the league table and seen as favourite to win the league by the way they went about the match.

Chelsea came into the game high on confidence after an impressive start to the league and they controlled the game from the blast of the whistle. They looked composed both defending and when going forward.

Even when Liverpool took the lead early on, there was no panic within the Chelsea rank, rather they responded well, controlled and took the game to Liverpool. Little wonder they got the equalizer almost instantly.

Mourinho’s 4-3-3 Formation Didn’t Quite Worked Fine Mourinho went with a 4-3-3 formation as against the 4-2-3-1 he has used in previous games and the players seemed to struggle with it earlier on in the game.

Fabregas and Matic in particular couldn’t just make a great work of their efficient partnership in midfield as seen in previous games in the season as there was a gulf of space between the two players.

This gave Chelsea problems closing down their opponent in the midfield and the result was that deflected Emre Can’s goal in the 9th minute. The two players will however, come to rhythm with each other as the game wore on.

Chelsea Attacking Players Were Not RuthlessHazard and Oscar were simply not ruthless in front of goal as everyone in the club would have wanted them to be. This is not to say that both players were not good on the day, in fact, both players were magnificent to watch in the afternoon.

They would peel off from their marker; dribble their way through bands of Liverpool players just to fluff the chance in front of goal. Hazard in particular had three great scoring chances in the first half alone with two of those blocked by Glen Johnson while he shot the other one straight at Simone Mignolet.

They will need to be more ruthless and take their chances in front of goals as they in most times find themselves in scoring position.

Liverpool Leaky Defence Liverpool’s defence this season have not been one to be proud of this season and once again they looked shaky and ready to creak anytime Chelsea come forward or take a set piece.

The defence have only kept two clean sheets in their last 17 league games. Chelsea scored their first goal through a set piece with John Terry and Diego Costa winning the ball twice in the air before Cahill shot past Mignolet.

The summer acquisition of Dejan Lovren has not really brought the result expected and Brendan Rodgers will still need to address that department of his team.

Goal Line TechnologyThe introduction of the much FIFA-maligned goal line technology in the EPL looks to have started yielding the expected dividend.

In time past we have seen referees and their lines men unable to spot balls that have crossed the goal line with a fraction of inches before being hauled back by defenders or goalkeepers. But with the goal line technology alert system dually rapped around the referee’s wrist, there is no making a wrong call on this one.

The goal line technology again today helped the referee to make the right call as 90 percent of the players and those watching the game did not know if the ball has actually crossed the line at a first glance. Technology is really coming good for sport and more importantly football.