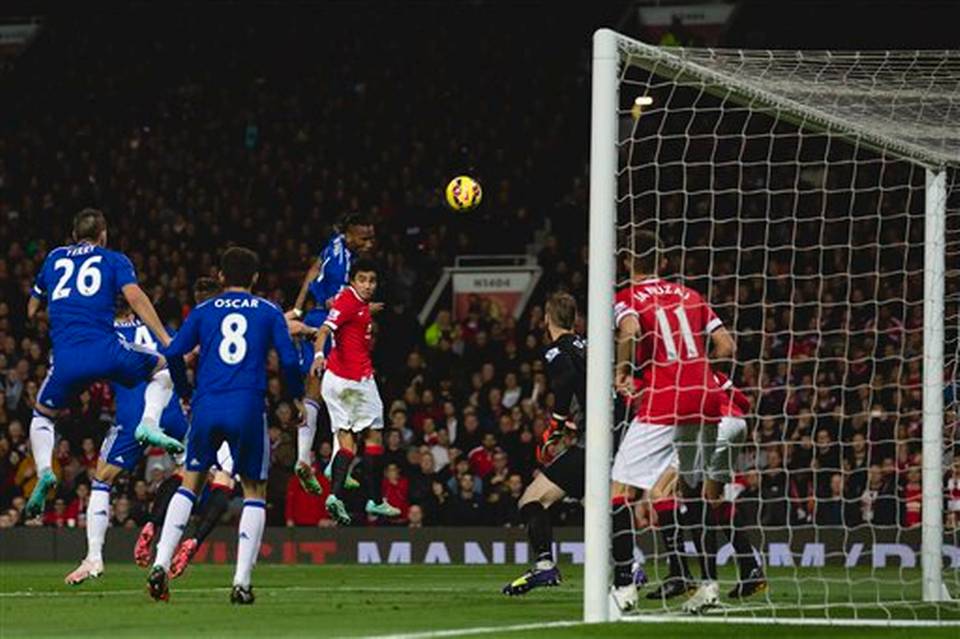 After much talk that preceded the Super Sunday clash in the EPL, Manchester United needed seven yellow cards, a red card and a ‘Fergie time’ goal to salvage a point at Old Trafford.

The encounter which was dubbed a “Teacher vs Student” encounter base on the relationship between Jose Mourinho and Manchester United’s Louis Van Gaal saw Old Trafford thrown into a state of uncontrollable ecstasy when a Robin Van Persie 92nd minute rebound cancelled out Didier Drogba’s 53rd minute strike to make the night of the home fans one to be much remembered.

Chelsea will go home looking like they have been hammered 6-0 while in actual sense it was a good solitary point gained away at one of opponent’s most dreaded football ground called Old Trafford.

We take a look at five things learnt from the 1-1 draw at the theatre of dreams.

Many have questioned the rationale behind dropping Chelsea long term save hand Petr Cech in favour of the young Belgian but Courtois showed in the weekend’s match that he is the right man for the club’s no.1 spot.

He made crucial saves times and time again which saw him deny Robin Van Persie, who was through on goal in a one-on-one situation. He also made a point blank save from a Fellaini’s header though he could do nothing to stop the instant rebound from Van Persie.

He has shown in recent games that he is capable of organising his defence line, showing great understanding with his centre half and was in total control of his box both during open play and set pieces. His ball distribution is also top notch. Performance like his is one that is capable of winning club games especially when you play a tough opponent like Manchester United.

Chelsea looked comfortable all through the duration of the game stroking the ball effortlessly around the pitch thus making United to work hard to curtail them. Chelsea did not really fight anything and were not really at the best as we have seen in other games this season thus giving United the chance to put up their best performance this season.

It was simply a case of United at their best just about matched Chelsea at their worst. This could be seen on the great joy and relief on United’s players, coaching staff and fans’ faces when the final whistle was sounded. The man who got the equaliser even had to pull off his shirt in celebration of what he described as ‘a winning goal’ while in actual sense they just managed to equalise on their home ground.

Chelsea on the other hand was left dejected after what looked like it would have been another 3points in the kitty was lost. And when you return from Old Trafford thinking 3points is what you deserve, that goes to show superiority.

Terry still one of the best centre back:

The 33-year-old does not seem to show any weakness that typifies players of his age and again at Old Trafford he showed that he is still one of the best centre backs around in the Premier league. He won all the battle against Robin Van Persie, his reading of the game and the way he command his back-line through his leadership competences is something the younger players will need to learn from the former Three Lion’s captain.

The Blues comfortably sit atop the Premier League table four point adrift second place Southampton who is not considered title contenders. The closest title rival Manchester City are already six point off the pace and Chelsea will need to lose two matches in a row to be toppled by any of the closest contenders. This is looking increasingly unlikely going by the way Chelsea have dispatched teams with relative ease. Chelsea has comfortably drawn away to Manchester City and Manchester United and has beaten Arsenal at home. If they come away with a good result at Anfield in a fortnight, it will be hard to see a team that will take points off them.

I’m not saying the team will be the next team to go unbeaten after the Arsenal 03/04 invincibles, but Chelsea already looks like coasting home with the title just nine games into the season.

Didier Drogba still have something left on him:

The powerful Ivorian might have looked well off the pace going forward, but he still have just enough left on him to play the role the club recalled him to play.

The Ivorian at 36 is just a back-up to first choice Diego Costa and Loic Remy. And in the absence of the two he has done quite a decent job scoring two goals in the process.

He has lost a yard or two of pace as can be seen in the two games against Maribor and United where he was always the last amongst the attacking players to arrive the box during each of Chelsea’s counters but his power, ability to hold up play and his aerial prowess are among the few attribute the man dubbed as the ‘King Of Finals’ still retains at his advanced age. His goal against United a reminder of his predatory instincts on air and reminiscent of the equaliser in the 2012 Uefa champions league final against FC Bayern at Allianz Arena.