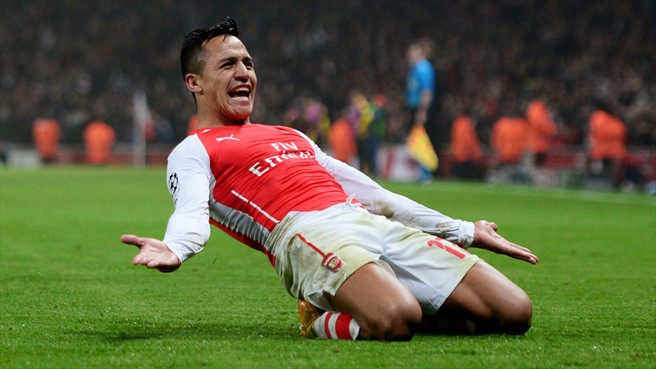 Arsenal returned to winning ways after an impressive 2-0 victory over Borussia Dortmund at the Emirates on Wednesday night in match day five of the Champions League. Goals from Yaya Sanogo (his first for the club) after 73 seconds and another from Alexis Sanchez settled the contest in favour of Arsene Wenger’s side.

The victory secures Arsenal’s passage to the knock out stages of the Champions League for the 15th consecutive season. We take a look at five things learnt from the match.

Mikel Arteta showed great form in his deep-lying midfield role in the match against Manchester United, and he carried that form into the match against Borussia Dortmund on Wednesday. He was assertive in midfield, and was very tidy in possession, his leadership on the day was epitomised by the directive he gave to Per Mertesacker to stay back when Arsenal was 2-0 up when the German opted to go forward for a set piece. It is a shame that he would be missing for sometime with another calf injury.

The 21 year old put in a swashbuckling performance on Wednesday, he was particularly impressive by the way he drove at the Dortmund defence, and he also aided Calum Chambers in defence, perhaps lessons learnt from previous defeats, he has been impressive in Arsenal’s last three matches, but those matches all ended in defeat, and his good works were not mentioned. His performance on Wednesday would have been crowned by his shot that hit the bar from 25 yards. It would have been one of the goals of the season going by the way he picked the ball out of the air.

The ambidextrous midfielder supplied two assists in the match, he has been remarkably inconsistent this season, drifting in and out of matches, but he was very impressive against the Germans on Wednesday. His contributions were not limited to the attacking third, but rather he contributed in defence also, a contribution that highlighted his box-to-box role in the match, he was a willing distributor of the ball, and was part a group of players that put in a good display on the day.

The 25 year old was excellent on Wednesday. He was responsible for cutting out several dangerous situations on the counter from Borussia Dortmund, he had a real battle with Dortmund right back Lukasz Piszczek on the day. The right back was booked in the 37 minute for pulling back Kieran Gibbs. After the own goal he scored against Manchester United on Saturday, it was a solid performance from the quiet Gibbs

The Chilean international was not his effervescent best on Wednesday, but he still conjured up a brilliant goal to effectively wrap up the match. That was his 13th goal in 20 matches for Arsenal, and his 3rd goal for Arsenal in five Champions League appearances.